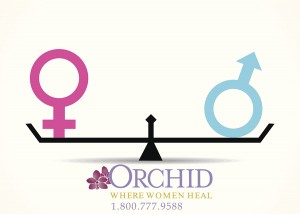 Generally speaking in male sex addiction, there is a tendency to objectify their partners. Men sex addicts seem to prefer sexual behavior that involves little, if any, emotional connection; therefore leading male sex addicts to be more likely to engage sexual activities, such as voyeuristic sex, exploitative sex, buying prostitutes, and having anonymous sex.

On the other hand, women sex addicts are more likely to use sex for power, control, and attention. This becomes evident in how they score high on measures regarding fantasy sex, seductive role-play sex, trading sex, and pain exchange.

Men’s sexuality seems to be a seemingly logical extension of what they’ve been taught. Our culture awards autonomy and competition, especially for male members of society, for example, getting ahead, ‘going for the gold,’ being an individual, being in control of feelings, keeping score of sexual encounters (“another notch in the belt”). When taken to the extreme, these values translate in extreme isolation, objectifying sex partners, difficulty expressing feelings, and a strong sense of entitlement at the expense of others. All of these are perfect factors for developing a sex addiction.

Female sex addicts, however, don’t seem develop their sex addiction as an intensified extension of cultural trends, like their male counterparts do. Instead, women sex addicts seem to be acting out sexually, as if in reaction to or in spite of culturally prescribed norms.

Author Carol Gilligan describes how women get their sense of identity from their relationships, in her groundbreaking work In a Different Voice, through something she calls the development of an “ego-in-context-of-relating.”

This differs greatly from male developmental theorists like Freud and Erikson, who asserted that there is a need among human beings to become autonomous, a model they based on themselves and then projected them onto women.