Initiative 71 for Legal Weed in Washington 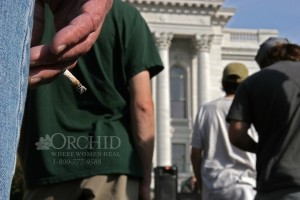 By a nearly 2-to-1 ratio voters said they’d pass marijuana legalization, which is on the ballot in D.C. this fall, according to a poll released last week. As it turns out, that’s probably the least of the trouble the new marijuana initiative may face. Apparently if there is to be any real hope of getting marijuana legalized in Washington so that residents, tourists, and politicians can legally get high in Washington, some extra paper-work has to come into play.

Successful ballot initiatives would be successful in most states. In Colorado and Washington state two years ago ballot initiatives helped in a big way, and in most cases that would be the final word on whether people can legally use marijuana. But in Washington, D.C. the more confining rules of governance don’t permit full independence from Congress, creating a little bit of a rift.

D.C. Council member David Grosso told National Journal explained that every bill passed in Washington must be submitted to Congress for approval. Initiative 71 is a bill that would legalize marijuana for anyone over the age of 21 and also allow:

But before Washington can even get this bill to Capitol Hill, the initiative may face a complicated onslaught by the City Council to combat D.C.’s unique oversight status. The council’s most pressing problem with the initiative is that if it passes, it still would not allow anyone to actually sell marijuana in the state. The District’s Board of Elections doesn’t allow ballot measures to impact the city’s budget, so essentially no one would be able to legally purchase marijuana either.

Despite these complications, David Grosso introduced a bill last year that would implement a “tax and regulate” system which would establish a way for people to buy and sell in a legal marijuana economy. The council overwhelmingly voted in approval for the decriminalization of marijuana earlier this year, and the two current council members running for mayor have voiced their support for dealing with the sale conflict Initiative 71 presents. Of course the council would support a tax-and-regulation system, because it would allow the state to gain revenue from legal marijuana taxation much like Colorado.

To reconcile the bill Grosso has developed with Initiative 71, City Council in D.C. is considering a dramatic intervention to pass emergency legislation blocking the voter-approved law from going into effect until the council can pass a complete law that will allow for legal sale of marijuana. The council has done this before. In 2010, when medical cannabis was finally approved, the council passed an emergency bill to put the implementation on pause so a framework could be put in place to regulate and accommodate the program. Only after that was developed did medical pot become legal in Washington.

The council doesn’t need congressional approval to pass an emergency bill, which allows for a 90-day grace period. After that it could delay it even further by passing temporary legislation that would push back marijuana legalization by another 225 days in case they needed to give the council time to pass the bill they, and many voters, really want: a legal, regulated marijuana economy.

Once the council passed bill heads to Congress for review, Washington will have reached part 2 of solving the problem. As long as U.S. lawmakers don’t raise any objection to a specific piece of legislation during this review period, it automatically become law.

City and federal government officials were unclear on whether Initiative 71, the ballot measure that doesn’t allow for the sale of marijuana, would go to Congress for review immediately after it inevitably passes. While there’s some confusion on whether the initiative would go to Congress in spite of an emergency bill, Adam Eidinger, the chairman of the D.C. Cannabis Campaign argued that because it amends the criminal code, it would be up for a 60-day review period for Congress to disapprove it.

Whether either Initiative 71 or a council-passed bill is pushed to this Congress’s lame-duck session or the next Congress, in January, depends on the length of the review period as well as how long the council takes to act.

To disapprove of a District law, any member of Congress can introduce a joint resolution, a standalone bill nixing the will of D.C. voters. This would be next to impossible in the current Congress; the Democrat-controlled Senate would never pass a bill like that, nor would President Obama sign it.

While so many stand to do whatever possible to push Initiative 71 through, whether for the public or for the economy, one lawmaker stands in strong opposition. Earlier this summer, Rep. Andy Harris, R-Md., attached an amendment to an appropriations bill blocking any funding for marijuana decriminalization in the District, and said he would do the same if legalization passed this fall. Harris has said he will do whatever it takes to block it, and went on to state in an emailed statement,

“The federal government should enforce federal law regardless of whether local citizens try to legalize marijuana. If legalization passes, I will consider using all resources available to a member of Congress to stop this action, so that drug use among teens does not increase.”

If Harris does successfully attach an amendment or rider to a House bill, and it makes it through the House, it would be another panicked frenzy of budget negotiations for the Senate, but it is unlikely.

In all honesty, given the threat currently posed by ISIS, U.S. strikes in Syria, and concerns about Russia’s actions in Ukraine, more pressing matters at home and abroad will likely take precedence over the worries about picking apart this initiative. Even if Initiative 71 or council-passed bill gets pushed to the next Congress (Republican-controlled or not), there have yet to be calls to prevent the legislation, aside from Harris’ personal pledge to stop it.

“We really won’t have arrests, or ticketing, or harassment of marijuana users. And we’re going to free up about $26 million worth of police resources and government resources that are spent enforcing the law currently,” Adam Eidinger went on to explain.

If Initiative 71 does not get torn apart by Congress, upon passing it would be legal for any D.C. resident to grow up to six marijuana plants, possess the drug, and share their crops with friends. Eidinger and other activists hope that a council-passed tax-and-regulate bill will ultimately win over the issue.

Should either bill survive the city chopping block, by next year we may see another state go green. While this may be bad news for some, great news for others, many people wonder if it will effect those in recovery. But many are certain with the right foundation, there is no need to fear the weed reforms. If you or someone you love is struggling with substance abuse or addiction, please call toll-free 1-800-777-9588