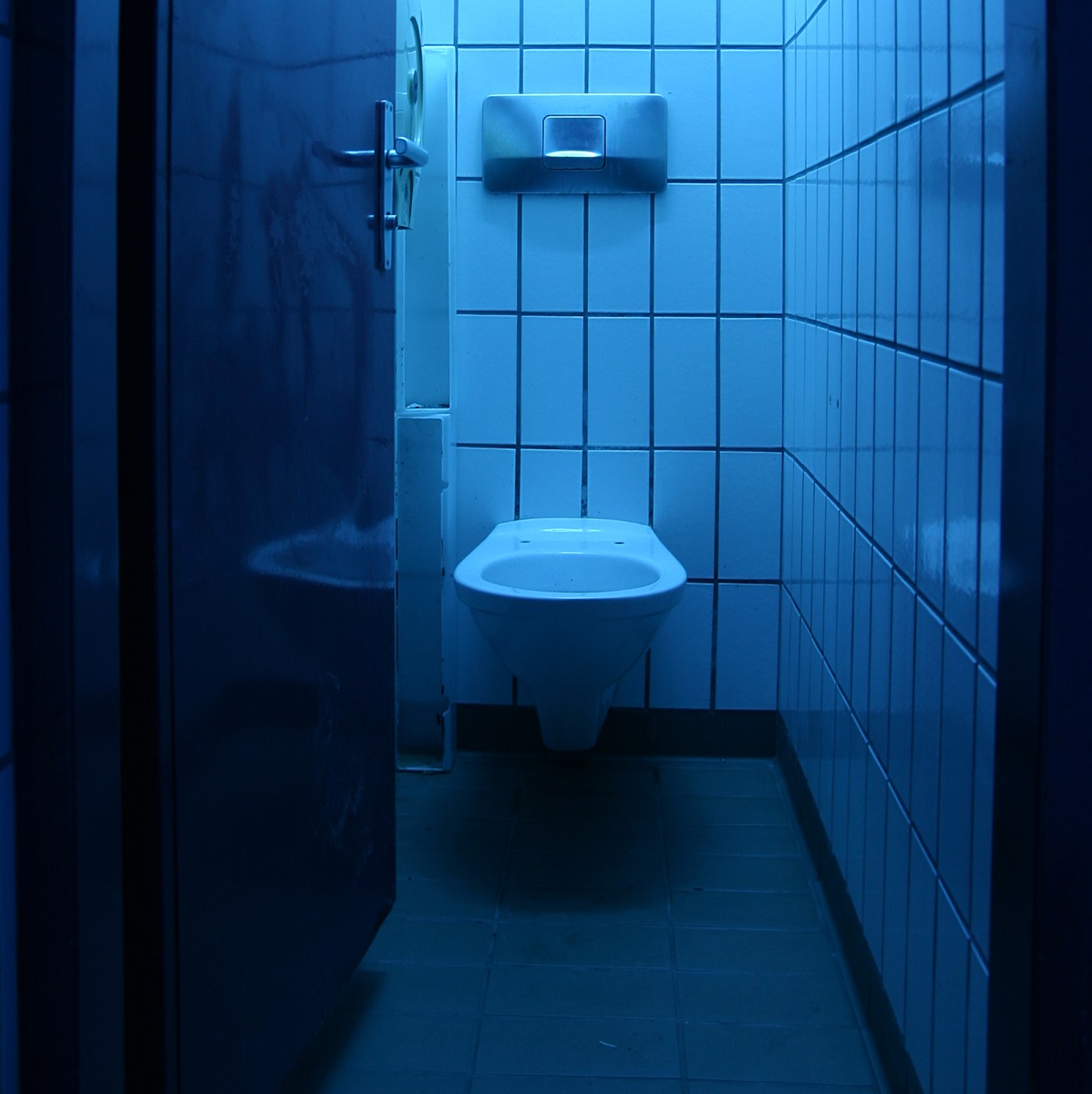 It has been said before that in the midst of the ongoing opioid crisis in America, public restrooms have become ground zero all across the country. You don’t have to look very hard to find stories about users being found in the grips of an overdose on bathroom floors; be it at a bar or nightclub, a gas station fast food restaurant, convenience store or even a local coffee shop. IV drug users injecting anything from meth to heroin, painkillers or fentanyl, often seek out the relative seclusion that can be found in public restrooms in order for a place to shoot up. So now, in an effort to prevent the use of public bathrooms, some establishments are utilizing colored light bulbs to deter drug use.

How could blue light possibly prevent drug use?

When I first heard about this concept I thought- what exactly is that going to do? How could making the room colorful stop someone from using? Have experts in psychology unlocked some hidden power of the color blue on the human mind nobody else knew about?

What kind of blue are we talking about here? Does it have to be a rich, navy blue? Or does Sapphire count too?

Well apparently, there is some logic to this tactic. The blue lights being placed in public restrooms are meant to discourage people from injecting drugs by making it much more difficult to see their veins. The idea actually isn’t all that new. Utilizing blue lights to make open bathrooms in retail businesses has been around for years. But thanks to the opioid epidemic, more consideration has gone into adopting the idea. Read Hayes, a University of Florida researcher states:

“The hardest-core opiate user still wants to be accurate. They want to make sure the needle goes in the right spot.”

Hayes is also the director of the Loss Prevention Research Council, a retail industry-supported group that is currently examining the effectiveness of installing blue lights to deter drug use. The Loss Prevention Research Council typically formulates new approaches to combat theft and violent crime at stores. While they say the blue lights study is still in its early development, initial feedback from stores currently field-testing the strategy has been positive. According to Hayes, the whole purpose of using the blue lights is to “disrupt the process” of intravenous drug use. The ultimate goal for the blue lights is to force drug users to go somewhere else.

Can this plan really work?

Again, when first hearing about this idea I thought- there isn’t much that can stop an addict from using when they feel they need it. Even after finding out the lights are meant to make it harder to see veins, I am still pretty skeptical that it will make these public restrooms immune to the problem. From personal experience, drug users are some pretty tenacious and resourceful people. So even knowing the logic behind the plan, will it really work?

Earlier studies on using blue lights to stop drug use question the deterrent effect. Most people who use opioids tell researchers that they would rather attempt to shoot up in a blue light and risk missing the vein than experience heroin withdrawal. In fact, for people who are well-adapted to injecting themselves, there are always ways around the lights.

Some stores seem to think so…

That being said, some of those field-testing the blue lights say they have noticed a drastic impact. One business, Turkey Hill Minit Markets, has installed blue lights in several locations. According to Turkey Hill’s asset protection manager Matt Dorgan, in some areas hit hard by the opioid crisis Turkey Hill store workers would often find used needles or even people overdosing in their restrooms. Dorgan said,

“We realized we need to do something to protect our associates and our customers.”

Turkey Hill added a broad set of security measures, including brighter exterior lights and security training for their staff.

In just over six months after the blue lights were installed in as many as 20 of the chain’s locations, Dorgan said,

“We’re not finding hardly anything anymore. It is a pretty dramatic reduction. We haven’t had a single overdose.”

While one could definitely consider having no overdoses in these restrooms as a strong high note, many public health experts oppose the practice.

Other experts urge for a different approach…

It is easy to understand why no retail business wants people overdosing or using drugs and leaving behind dangerous paraphernalia on their property. They want to maintain a safe environment not just for workers, but also for customers. Still, health officials think this is not the best they can do.

One main issue health officials take with this tactic is that blue lights make it more likely that drug users will hurt themselves. This is because, as we talked about before, most people battling with a severe addiction will not let blue lights stop them from trying to inject themselves. Furthermore, experts also believe that putting users in this new light will also further stigmatize those struggling with addiction. Health officials are currently suggesting other methods of interventions that don’t include blue lights, such as:

Brett Wolfson-Stofko from the National Development & Research Institutes has studied injection drug use in public restrooms. He insists that someone in withdrawal who obtains heroin or other opioids is-

“- going to want to use as soon as possible, even if the location is not optimal.”

With addiction and opioid use affecting so many countless people all across the nation, it is understandable that many want to promote harm reduction strategies instead of relying on tactics that make drug users even more vulnerable.

It isn’t just retailers that are trying out the blue lights. The city of Philadelphia now hands out kits to residents to combat drug use on private property, including:

This approach seems to be a little more comprehensive by offering harm reduction resources in addition to the blue lights. Since January, Philadelphia has given out more than 100 kits.

In the end, we can look at both sides of this conversation and try to understand. Business owners and private citizens don’t want people overdosing in their restrooms or outside their homes. Why would they? At the same time, drug users are already in the grips of a life-threatening battle. We should try to support them instead of putting them in even more danger just because it is more convenient.

So how do we find a better way to prevent drug use in public places? Maybe we should make more of an effort to support effective addiction treatment options. Perhaps instead of putting a blue spotlight on people who are struggling, we should rally our resources behind innovative and compassionate addiction treatment opportunities for those suffering.

For over 15 years, the Orchid Recovery Center has provided safe and effective treatment options, focusing on holistic health and transforming lives. If you or someone you love is struggling, please call toll-free 1-800-777-9588 now. We want to help.