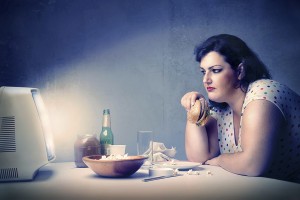 Researchers describe binge eating as eating a large amount of food in a short period of time (without a harmful purging episode). A recent study has found new evidence that suggests binge eaters are likely to experience more episodes of compulsive eating while watching television.

The study was published in the January 2014 issue of Eating Behaviors, and the data presented by the researchers notes that people who make an attempt to lose weight are often let down by a series of binge eating, and there is some patterns that link that to binge-watching television.

Binge eating is also described in more detail as repeated periods of excessive overeating, which are then followed by the individual feeling ashamed and guilty. The study also shows that their television viewing patterns may be used to predict such behaviors.

The disorder can also be connected to a variety of factors that have some impact on a person’s unhealthy eating habits, such as:

But beyond these elements, the study pointed out that the amount of television viewed per week was actually a significant predictor for binge eating among the participants in the program.

The data was collected from a group of all adults in group-based weight loss programs. The whole experiment was implemented to try and answer one question in particular: how much television can bring on a binge eating episode?

Change the Channel and the Focus

According to the National Weight Loss Control Registry, the majority of people who are able to not only make some headway with losing the weight, but also have the ability to keep from gaining it back watch less than 10 hours of television per week. If you were to hold that statistic up to the average American, who is cited as watching nearly 39 hours of television each week, that’s an impressive difference.

Television is a distraction, out of many, that helps to make binge eaters ‘disinhibited’ while eating their meals. What they mean by ‘disinhibited’ is that they stop thinking about the amount of food they are consuming, how it makes them feel, or how it will make them feel later. It removes the conscious effort to control their consumption.

When an individual is focused solely on the meal itself while their eating instead of external distractions like what is on TV (or often now-a-days sometimes what is on their smartphone) they often become aware of how much food they are actually consuming, in turn this provides greater awareness of binge eating patterns and they are able to make a conscious effort to disrupt that unhealthy pattern.

John Menzies, Ph.D., a University of Edinburgh researcher who studies the neuroscience of hyper-palatable foods commended about the meaning of food addiction,

“’Food addiction’ has been implicated as a potential contributor to the obesity epidemic. However, there is no association between diagnoses of addictive-like eating and body weight.”

People of what’s considered to be ‘normal weight’ seem to have signs of a food addiction, while there are some obese people who have normal, healthy relationships with food. It’s those relationships, not the food itself, that should be the focus of analysis and intervention.

Here are some signs of food addiction:

However, Menzies argues that there is currently not enough evidence to ensure a certain food can be considered an addictive substance like cigarettes or alcohol.

Menzies explained that it is more suitable to consider chronic overeating as an ‘eating addiction’ instead, based on his review of almost all the studies on the subject published recently. He also states:

“‘Eating addiction‘ shifts the focus away from the food itself to the behavior. It emphasises that we need to look carefully at people’s relationship with food and understand how people make their food choices.”

So should the binge eating habits brought on by an individual sitting in front of the television for hours on end, letting their focus be else-where while they consume excessive amounts of food should be leaning more toward an ‘eating addiction’ than a ‘food addiction’… if anything?

I’m sure we have all been there at some point of another. Started a movie with a bowl of popcorn, and before the previews are even done the popcorn is gone? Yup, that’s what we’re talking about. Next time you go nuts on Netflix, try and refrain from the extra snacks.

Binging on food, entertainment, and especially drugs and/or alcohol can be extremely harmful to your health, and most of these can actually take your life in one way or another. Be aware of the obsessions and compulsions you develop, because you never know which one could take everything you have. But where there is danger, there is always help. If you or someone you love is struggling with substance abuse, addiction or compulsive behavioral disorders please call toll-free 1-800-777-9588