6 Parts of the Body Affected by Binge Watching TV 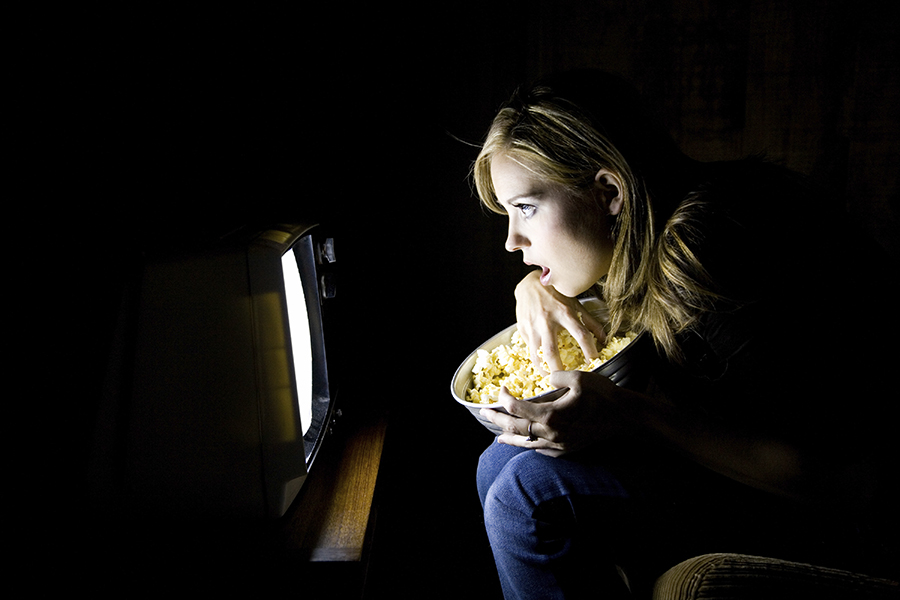 Looking at the data used by Netflix it was discovered that people prefer to watch TV-shows in long sessions as opposed to several short sessions, and a lot of us knows what that feels like. Sitting on the couch for hours on end focused on whatever drama is unfolding on-screen to distract us from the stress and drama of real life, and binge watching can easily become a compulsion.

In a previous article is was noted that the LA Times defines binge-watching as:

“any instance in which more than three episodes of an hour-long drama or six episodes of a half-hour comedy are consumed at one sitting.”

So when taking this into consideration, the concept of developing a Netflix addiction, or an addiction to any other media streaming service seems like a possibility.  The next question becomes, how bad is it for you? Well beyond the obvious implications of words like ‘addiction’ or ‘compulsion’ we can look at what has been determined at physical effects of binge watching. Here are just 6 parts of the body affected by binge watching TV.

The spine can take come damage just by prolonged periods of sitting. Sitting curves your spine into a C-shape, and when the newest movie marathon is on and you are sitting in that position way too long it can actually cause cramped and aching muscles, while cramping together your organs.
This isn’t the end of the world though. An expert binge watcher would suggest a comfy recliner. Posture expert Galen Cranz, who is a professor at the University of California Berkeley, has said that recliners will let your back keep the natural S-shape it has when you’re standing.

Since we’re on the topic of sitting, it also shrinks your lung capacity by a third, so you get less oxygen! The decrease in oxygen also causes a decrease in mental focus from the moment you sit down. Again, trying to keep that S-shape helps keep the lungs open.

Next one on the list is those gains dude! You may not notice, but according to a six-year study of more than 15,000 adults, people who say they watch TV “very often” are 40% more likely to exercise less than one hour a week. Not too much time to run a lap between commercials (if you even know what those are), so unless you do push-ups all the time watching TV you will get soft.

Weight gain is one that may seem a little more obvious, but still needs to be pointed out. Another study in the United States over 6 years found some interesting statistics that may not be all that shocking, but still could prove helpful. Every 2 hours of TV you watch a day, you’re:

Now no one expects you to look like the actors on your favorite shows, but obesity is about more than body image, and has a lot to do with heart health.

Ever heard that TV rots your brain? Well the mind is a terrible thing to waste… on reruns at least.

Researchers at Brigham and Women’s Hospital recently found that a typical binge estimated at 4 hours in front of fluorescent light before bed results in:

This adverse effect is caused by the infamous “blue light” that a TV produces. Prolonged exposure to this kind of light inhibits the release of melatonin, a hormone that helps you fall asleep. The good news is that daytime bingeing won’t affect your sleep, but you should consider limiting your viewing to 3 hours after work. Thankfully with streaming you won’t miss anything.

This may break your heart… literally. Binge watching TV creates a lot of physical problems, and heart problems is a big one. A recent study of Australian national health records found that, on average after age 25, every 1 hour of TV watching reduces life expectancy by close to 22 minutes! It is no wonder binge-watching TV hurts your heart health when it can cause so much trouble with weight gain and breathing. All these physical signs of binge-watching can grow into much more serious issues.

Binge-anything is probably a bad move, and binge-watching Game of Thrones may seem like a great idea at the time, and I know I got a few seasons to catch up on myself, but at the end of the day looking back it is very unhealthy. Our compulsive behavior often takes more of a toll than we care to notice at first, but they can become destructive addictions. If you or someone you love is struggling with substance abuse or addiction, please call toll-free 1-800-951-6135