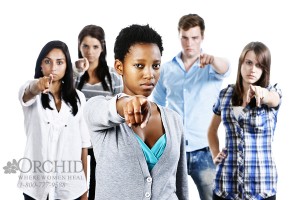 One of the greatest obstacles that holds an addict or alcoholic back in recovery, especially in early recovery, is stigma. The stigma against people with drug addiction is so exaggerated, that those who suffer from addiction are even more likely to face judgment than those with mental illness because according to a new study they’re seen as having a “moral failing” not an serious illness.

In a survey done on over 700 people across the United States, the public opinion expressed it is less likely to approve of insurance, housing and employment policies meant to help people with drug addiction.

The results also suggest that many people consider drug addiction a personal vice rather than a treatable medical condition, according to the Johns Hopkins Bloomberg School of Public Health researchers.

Both drug addiction and mental illnesses are chronic, treatable health conditions. But the American public is more likely to think of addiction as a moral failing than a medical condition. The survey revealed statistics showing:

As a result of this misunderstand of what the disease of addiction truly is, the addict is often blamed by the average person who does not understand the illness. Therefore most people avoid ever getting help. Family and friends are sometimes very hard on us addicts, and there are commonly 6 normie (normal people) beliefs that add to addiction stigma.

A lot of normies believe that addiction is a choice. They say you choose to do drugs, and you choose to keep doing them, but any real addict or alcoholic can tell you that choice goes out the window most times far before we ever realize we lost the power to choose. No one chooses to be addicted, addiction is a disease. While in active addiction we are powerless, but in recovery we are given a solution.

Again, if stopping were as easy as wanting to stop, most addicts would. The point of being considered an addict or alcoholic is the fact that even when you want to stop, you cannot.

An addict can have all the moral and emotional leverage in the world, but without a program of action in recovery along with abstinence, they may never experience lasting sobriety.

Addicts have a disease that takes away the ability to stop using or drinking once you have started. Addicts and alcoholics typically experience a craving, especially once they have taken the first drink or drug, and are not able to control how much they consume once they have started.

Self-control is not the simple solution that will cure and addict. The person may be very morally strong with great conviction, but they still have no power over the addiction.

A lot of times friends and family of addicts assume that the people they associate with are the primary concern, and that once they let go of these negative outside influences they will have a better chance of staying clean and sober. But any addict or alcoholic knows that they could be on a bus full of nuns and still find a way to make a pit stop at a dive bar.

One of the worst misconceptions about addicts and alcoholics is the assumption that they only hurt people because they don’t care about them. This could not be more untrue.

Addicts and alcoholics care intensely about people, and this does not mean the things they do in active addiction should be absolutely excused with impunity. But it does mean that someone should not assume an addict cares less or nothing for them because they lie, steal or manipulate. They are still a very sick person.

Not all addicts and alcoholics are exactly the same. Yes, at the end of the day an addict or alcoholic has the same common affliction, the condition of addiction, but they are not a stereotype.

It used to be that stigma was so strong that an addict was always expected to have the same appearance, but recently it has become more and more obvious that addicts and alcoholics come from all social, economic, racial and personal backgrounds.

There is no exact formula for addiction, it is an imperfect storm that creates this disease, and it often infects some of the most caring and beautiful people. Addiction is far more than what most people expect it to be, and goes beyond a moral failure or an emotional damage. Some evidence suggests there is a genetic predisposition, and there is often a spiritual aspect of the disease that many believe is crucial to recovery.

No matter what you choose to believe, you should believe recovery is possible. If you or someone you love is struggling with substance abuse or addiction, please call toll-free 1-800-777-9588