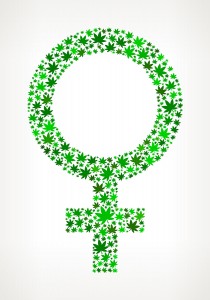 What was the cure for the common aches and pains for the ladies once upon a time? Apparently a lot of it was a mixture of lambs fat and cannabis. Where does it hurt? Slather on some marijuana and other natural ingredients, it’ll be fine. This was a very familiar tactic for European women for a while, and there is actually a secret history of weed and the many ways women used it in medicines.

While the United States is only just now openly exploring the medical uses for marijuana and finding a place for it in modern medicine, many women around the world have harnessed the healing power of cannabis herbs.

While there isn’t much evidence on how safe and effective these old-school weed remedies for women were, it may be possible to take a more in-depth look at the old remedies to inspire new research into cannabis’ medical potential today. So let’s take a look at 5 ways women in history used weed.

Women have used marijuana as a topical treatment for centuries. Back in the 11th century, women used a mixture containing marijuana to treat swollen breasts. The Old English Herbarium described the process as rubbing the herb with fat to the effected area to disperse the swelling. Historical records also show that this same method was used in 19th century Germany and Austria, where cannabis would be applied to the breasts of women who suffered from painful swelling after giving birth.

Starting back with the 7th century, Indian tantric sex practices quite typically included the use of cannabis. Called Bhang, women mixed the weed with milk, water, and other spices into a kind of “marijuana milkshake,” which practitioners drank to enhance sexual pleasure. Today many people still claim that weed is an aphrodisiac. In all honesty though, getting high will usually strip any inhibitions, that don’t mean it’s a good thing.

A German physician back in the 17th century claimed that cannabis was a remedy for gonorrhea. The physician made a recipe that called for cooking the marijuana plant in water with nutmeg, then consuming it.

Then 1860, an Ohio State Commission seconded this claim stating that cannabis was a cure for gonorrhea when mixed with milk and sugar, taken every three to four hours for a week.

As if that was not crazy enough, 19th century Persian women used cannabis to help manage an STD prevalent among sex workers at the time urethritis, which is a bacterial infection that causes inflammation of the urethra.

Smoking a joint during childbirth is definitely frowned upon nowadays, since long-term side effects of marijuana exposure for infants are still unknown, even though its probably safe to assume smoke is bad for a baby.

But back in the day of ancient Egypt, marijuana was frequently used during labor. Ancient Egyptians would grind cannabis into honey and actually apply the mixture to induce contractions.

“remarkable power of increasing the force of uterine contraction during labor.”

Then a few years later in 1854 the Dispensatory of the United States mentioned the medical use of marijuana during childbirth, especially to aid with contractions.

When you think of marijuana as a head-ache cure, you probably assume that smoking pot is of course meant to make you light-headed, but in Persia during the 9th century the juice from cannabis seeds was mixed with other herbs and used to treat migraines and other pain-related ailments.

Even in 1942, editor of the Journal of the American Medical Association Morris Fishbein recommended cannabis drops for migraines, and especially suggested it for women about to get their period, and marijuana was also expected to make periods more bearable.

This theory was so serious that Queen Victoria actually used to receive monthly doses of cannabis from her personal physician, Sir John Russell Reynolds, to relieve menstrual pain.

Meanwhile, in America women used Dysmenine. Guess what the not-so-secret ingredient was!  This medical syrup contained cannabis, and was commonly used to treat cramps. So some lucky ladies caught a contact high as part of their cycle.

So while some of these applications may not seem the safest or the most effective in terms of modern medicine, what many do take from this strange hidden history between women and weed from a medicinal stand point is that there is probably some good that can come from cannabis. However, many of the ways that weed has been used in the past is not as positive or effective as we would like to think, and some of it can become dangerous.

Marijuana may have some potential to be helpful medically, but it also has some serious potential to contribute to addiction and substance abuse issues that can destroy lives. Like any other medication, it can be abused. If you or someone you love is struggling with substance abuse or addiction, please call toll-free 1-800-777-9588