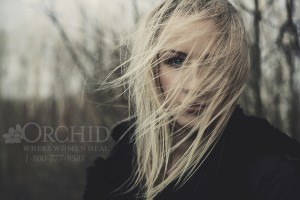 There has been some debate in the past as to whether food addiction and stress eating are valid afflictions, and how these can be properly diagnosed and treated. However stress eating is a very real condition. In fact a recent study has found that specifically women who suffer from symptoms of post-traumatic stress disorder (PTSD) are twice as likely to develop harmful and unhealthy food addictions. Researchers note that this doesn’t necessarily prove that there is a definite connection between PTSD and food addiction, but it does demonstrate a link between PTSD and the dangers of obesity.

Post-traumatic stress disorder (PTSD) – a mental health condition that is triggered by a terrifying event or trauma. The individual with PTSD could either be the one who experienced it or it could be someone who witnessed a traumatic event. Symptoms may include uncontrollable thoughts about the event, as well as:

Many people who have gone through some type of traumatic experience have difficulty adjusting and coping with that experience, but they don’t always develop PTSD. With time and good self-care, these individuals who do NOT have PTSD usually get better. But if the symptoms get worse or last for months or even years and interfere with your functioning, you may have PTSD.

What is Food Addiction?

Research done using animals and experiments in humans has shown that for some people the same reward and pleasure centers of the brain that are activated by using drugs such as cocaine and heroin are also activated by food; especially rich in sugar, fat, and salt.

Very similar to illicit substances, really tasty foods trigger a feel-good response in your brain due to the release of the neurotransmitter called dopamine. Once you experience the pleasure of eating, due to the increase in dopamine, you will quickly feel the need to eat again. And this is where food addiction starts. The reward signals or dopamine release from highly palatable foods may override other signals in the brain such as fullness and satisfaction. As a result of that override, you end up overeating.

People who have signs of food addiction are very similar to those who show signs of drug addiction. You may end up developing a tolerance to food which means you have to eat more and more only to figure out that food satisfies you less and less. Scientists believe that food addiction may play a significant role with those who suffer from obesity.

Information on the Study

Susan Mason is the lead author of the recent study into the effects of PTSD on food addiction, and she says she hopes to educate doctors about the link between eating disorders and PTSD, and the realities of food addiction.

“I’d really like the message to come across that people bring a whole lot of history to their eating behaviors. Clinicians may be able to look for that information to deliver better care.”

Those who suffer from PTSD may exhibit certain behaviors implying they are dictated by their reliving, avoiding or attempting to numb themselves in response to traumatic events. These people make up about 7% of Americans, most of whom are women. Other studies have found that those who suffered from childhood abuse are more likely to suffer from food addiction later in life, and those who use food to cope with that stress are likely to end up struggling with obesity.

“I just want this to add to a lot of research that people’s weight status is not just a symptom of willpower and education,” Mason said. “There may be psychological factors in play too.”

The researchers also found that the women who showed from around 6 to 7 symptoms of PTSD were twice as likely to suffer from food addiction as someone who did not. This information supported went on to support the link between PTSD and food addiction was stronger if the subject had suffered from childhood abuse.

Given the nature of PTSD and the concept that a lot of food addiction has to do with the individuals need to gain stimulation from external sources in order to cope with personal issues, there is no wonder how some could believe that PTSD and other stress eating symptoms are closely related. With the right kind of dual diagnosis and the kind of excellent treatment you can expect from holistic healing facilities, there is great hope for recovery, and overcoming fears of the future.

If someone is consuming anything, be it drugs or donuts, heroin or hamburgers, in order to activate their pleasure sensors in the brain and avoid or alleviate their trauma that is a pretty valid point in the argument that trauma and stress could greatly contribute to the development of eating disorders and food addiction, and women are at higher risk being that they make up most of Americans suffering from PTSD. If you or someone you love is struggling with substance abuse or addiction, please call toll-free 1-800-777-9588. We want to help. You are not alone.