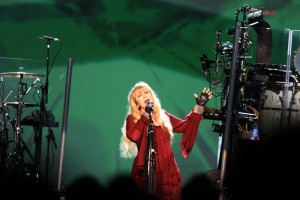 Legendary rock musician Stevie Nicks, who was first known for her part in Fleetwood Mac and then went on to establishing a successful solo career, made an historic return to Rolling Stone magazine this month. The newest volume, which came out today, marks the first time she’s been featured on the cover since her 1981 appearance – 34 four years ago.

The rocker talks about her experiences as a member of Fleetwood Mac, with whom she’s currently touring once again, as well as the darker side of fame: specifically, drug addiction.

“All of us were drug addicts, but there was a point where I was the worst drug addict…I was a girl, I was fragile, and I was doing a lot of coke. And I had that hole in my nose. So it was dangerous,” she reveals during her interview with the music magazine.

Ms. Nicks admits, however, that she still smokes weed because it aids her creative process. “When I’m writing, I will allow myself to smoke a little bit of pot. It’s my one little thing that I can do. I use it as a tool.”

The rock legend and goddess also opens up about the perils of her dating life, and admits that her relationship with fellow Fleetwood Mac bandmate Lindsey is exactly as it always was: “He and I will always be antagonizing to each other, and we will always do things that will irritate each other…and I don’t think it will be different when we’re 80.”

Stevie also confirms that, ultimately, the iconic troupe will always stay together: “We choose to stay.”

Food for Thought: Marijuana Maintenance and ‘Tool for Creativity’

Ms. Nicks never claimed to follow an abstinence program however, she admitted to being an “addict” and, furthermore, the “worst drug addict” among the band.

People who follow abstinence programs, such as AA and NA caution against so-called marijuana maintenance as a way to recover from addiction to what’s considered “hard” drugs like heroin and cocaine. After all, an abstinence program means abstaining from all psychoactive drugs and marijuana is counted among those substances that are “mood or mind-altering” substances.

What do you think? Can someone overcome addiction but continue to use other drugs “successfully?”

Also, Stevie said that she uses pot as a tool for tapping into her creativity, echoing the argument of many others who believe that they can’t create their art – whether it’s painting, photography, music, or something else – without drugs.

Here at The Orchid Recovery Center, we say that creativity is indeed possible without the crutch of drugs and, in fact, being clear-headed will increase one’s creativity.

If you or someone you love is struggling with substance abuse or addiction, treatment can help you get back on track in life and pursue your goals and dreams. Please call an Addiction Specialist today at toll-free 1-800-777-9588 to learn about how we can help.