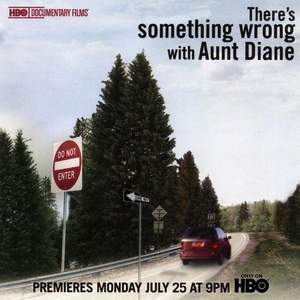 On the afternoon of July 26, 2009, Diane Schuler drove the wrong way in the fast lane of the Taconic State Parkway in New York for nearly two miles, before colliding head-on with an oncoming SUV. The end result was tragic: 8 casualties including herself, her 2 year-old daughter, three nieces, and all three people in the other car. Bryan, Schuler’s five-year-old son was the sole survivor. By all accounts, Diane had no history of substance abuse or psychological problems, and was generally known to be a “put together” person – highly-organized and on top of things; a loving and stable wife and mother.

An HBO Original documentary entitled There’s Something Wrong with Aunt Diane explores the facts and speculation surrounding this tragic accident. The film follows Diane’s husband and sister-in-law, who believe that Diane may have had a medical emergency that precipitated the crash, and who go to great lengths – hiring a lawyer and PI to investigate the events leading up to the crash and the original autopsy findings. Piecing together a minute-by minute retelling of the fateful day, along with interviews with Diane’s family and friends, victims’ families, eyewitnesses, investigators, and medical and psychiatric experts, the feature-length film reveals a complex and complicated case that still leaves a lot of unanswered questions, mainly, what really happened to Aunt Diane?

At autopsy, a toxicology report shows that Diane Schuler had a blood-alcohol level of 0.19 at the time of the crash, the equivalent of 10 shots of vodka – a bottle of which was found in the car at the scene, which is more than twice the legal limit of 0.08.

Toxicology tests also determined that Diane Schuler had “high levels” of THC in her system at the time of her death. The report said she smoked marijuana as recently as 15 minutes prior to the 1:35 p.m. crash.

By all accounts, Diane Schuler was dependable, responsible, and “very on top of things.” She had a high-paying job, making about $100,000 a year, and managed to take care of the household. The children were always dressed to a “T” and clean; Diane was very involved with their school and extracurricular activities and was always on time. She was well-liked by coworkers who describe her as a “take-charge” type of person; a “decision-maker” who was highly organized and meticulous.

But the tests don’t lie. And the samples had been re-tested: Diane was highly intoxicated by both alcohol and marijuana when the crash occurred. How can such a well-put-together person fly under the radar of friends and family as an active alcoholic and addict?

In an attempt to answer this, the filmmakers interview a specialist known as a forensic psychiatrist who performs what is called a forensic psychiatric autopsy to look at the state of mind and background of Schuler at the time of the accident. He describes Schuler as a “hyper-responsible” and “tightly-wound” individual who was at risk for mood and addictive disorders due to being abandoned by her mother at the age of 9.

Medical Emergency or a Family in Denial?

Schuler’s husband and sister-in-law are adamant that Diane must have suffered from some sort of medical problem leading up to the crash. Surveillance footage documenting the events that morning shows Diane stopping at a gas station in search of an over-the-counter pain medication for an abscessed tooth. Friends and family state that, in the week prior to the accident, they recall Diane rubbing the side of her face and wiggling her jaw, in apparent discomfort. Dental records confirm that Schuler had recently been seen for tooth pain and “jaw difficulty.”

When asked what he remembers, her son Bryan says that “mommy’s head hurt; she couldn’t see.” Tragically, it seems as though the accident might have been avoided: calls to family members during the car ride by both Diane and one of her nieces reveal that something was amiss. Diane called her brother and said something incoherent before hanging up. The niece called her parents and just said, “there’s something wrong with Aunt Diane.” At one point, Diane pulls over on the side of the road and the niece was able to convey what exit they were near. Family members rushed to find them but, inexplicably, Diane, leaving her cell phone on a jersey barrier, begins driving again. It should have only taken them another hour to arrive home but, police report, at this time, Diane got off the highway – the route she should have been taking – and from there’s it’s unclear as to where she went. Apparently, Schuler drove for a total of four hours before the tragic crash.

Draw Your Own Conclusion

The film There’s Something Wrong with Aunt Diane still leaves us wondering what actually happened to cause the chain of events and eventual fatal crash. Is it possible that Diane Schuler was a functional alcoholic who had everyone fooled? Or was her family in denial and basically enabling her disease? Could Schuler have chosen to drink – perhaps a little, at first – in an effort to self-medicate a sudden, almost debilitating pain from an infected tooth? Did the abscessed tooth cause a stroke leading her to become disoriented and confused – thinking that the vodka she was chugging was water? Or, had everything gotten to be too much…did Diane Schuler decide to do something drastic by taking her life and the lives of her daughter, nieces and three other innocents and, in order to go through with it, needed some liquid courage? There is no real closure to this story. We will never know what really happened that tragic July afternoon.

If you or a loved one is struggling with substance abuse, addiction, or mental illness please call toll-free 1-888-672-4435.