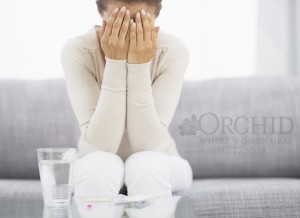 The antidepressant Trazodone is a powerful medication that elevates levels of serotonin in an individual’s brain. This medication is typically prescribed to individuals who suffer from any one of a variety of mental or behavioral disorders, and is a powerful source of relief for many with more serious mental health conditions. Despite it’s ability to help treat several types of mood disorders, Trazodone has become relevant in recent years that this drug has become more likely than ever to be abused.

Trazodone was initially developed as a treatment for a mental pain hypothesis which includes the idea that major depressive episodes can be brought on simply by a lower pain threshold. Serotonin is the neurotransmitter in the brain recognized for the effect it has on the happiness and well-being sensors of the mind. By enhancing the activity of the serotonin the symptoms of depression should ideally be relieved. The drug itself aims to balance the pain threshold anomaly and bring about regular brain functions, which in turn should promote a more positive lifestyle.

In addition to treating depression, Trazodone can also be given to those suffering from anxiety, insomnia or chronic pain. It is also sold under several other brands, including:

Typically, those with the following disorders are prescribe Trazodone:

This medication is available as a tablet in standard or extended-release forms. But monitoring a patient to decide the dosage is essential, because the drug has numerous side effects when it is abused, and has a potential to be very addictive.

As both an antidepressant and a sleeping pill, Trazodone has now become the 17th-most abused drug in the USA. The reasons for addiction are that an individual feels they simply cannot live life normally without it, which makes sense seeing as how it was designed to make life more joyful and more manageable in painful circumstances. Dependency on Trazodone can result quite easily from improper use.

One reason for the drug’s addictive quality is that it Trazodone works rapidly, reaching maximum effectiveness within approximately an hour of ingestion. Because of Trazodone’s fast acting delivery it can seem to offer a quick fix to life’s problems. The drug then often becomes an easy solution for those who are clinically depressed or suffering from severe lack of sleep, and people become dependent on its affect. When combined with other substances, Trazodone has even more potential to be abused. This is especially true when it comes to alcohol.

There are many risks in the abuse of Trazodone. Due to the fact the drug has a number of side effects which can range from mild inconveniences to severe illnesses and even death, Trazodone abuse should not at all be taken lightly. If taken for an extended period of time Trazodone can create symptoms such as:

More severe side effects which can result from the incorrect ingestion of Trazodone. In particular, once an individual begins to take the drug, they may experience some increase in their mental instability, dealing with things such as :

As well as having several psychological side effects, Trazodone can also result in the following more severe physical reactions:

As there are so many risks involved with taking Trazodone over the long-term in an unsupervised situation, it is important that anyone who is addicted to the drug be placed into rehab therapy as soon as possible. This will help them work their way to becoming free from their dependency.

Trazodone abuse and addiction also come with a great deal of withdrawal symptoms that make it much more difficult to cease the use of the medication These include mental and physical symptoms, and an individual coming off Trazodone should be closely monitored to reduce risk due to possible clinical depression or other mental health issues. Withdrawal symptoms include:

Someone who is addicted to Trazodone will need to undergo treatment in order to properly wean themselves off the drug. This is because a dependency on its effects can result in a lengthy withdrawal period in which constant medical and psychological supervision must be applied. This is especially important, as the individual may also be clinically depressed, anxious or suffering from insomnia. In these cases, there is a real reason why they are dependent on Trazodone, and an alternative must be found before any chance of recovery can be made.

Trazodone meant to help treat those with serious complications like insomnia, depression, or bipolar disorder is being abuse along with other prescription medications, every day. Worst of all, most people don’t even realize they are abusing their medications until a serious drug addiction has developed, and many have no idea how fatal this kind of misuse of medication can be. If you or someone you love is struggling with substance abuse or addiction, please call toll-free 1-800-777-9588