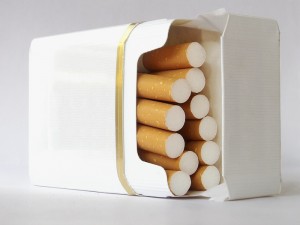 More than three years ago, Congress allowed the Food and Drug Administration (FDA) to oversee the tobacco industry. In response, the FDA seized the opportunity to push the use of full color “smoking kills” labels, featuring frightening photography, that they planned to use to cover the top half, front, and back of every pack of cigarettes. The goal? To get people to quit smoking. The latest pictures proposed for this purpose include:

The labels were without a doubt designed to get attention, and the FDA didn’t want anyone to be able to ignore them.

One of the tobacco industry’s giants, R.J. Reynolds Tobacco Company, did not want to see their bottom line affected by graphic images and took the FDA to court. Recently, the D.C. Circuit Court of Appeals ruled in favor of R.J. Reynolds, upholding a decision handed down by a federal district court earlier in the year.

The courts have found two major issues with the FDA’s labels:

Even Big Tobacco Is Allowed Their First Amendment Rights

The First Amendment right to free speech was put in place for situations just like this, say legal experts. Free speech isn’t provided so people with a popular opinion or product can be heard; it was put in place to protect those whose opinions are unpopular and even disliked – including Big Tobacco.

Cigarettes are legal and therefore the corporations selling the product have all rights that the First Amendment allows individuals. The courts are not ruling in favor of addiction, lung cancer or emphysema. They have to function off the fact that a legal corporation’s freedom of speech is in jeopardy. Some say that the fact that a “disfavored” industry such as Big Tobacco can have its day in court fairly is what this country is all about, while others see it as a death sentence for individuals with addictive tendencies.

Big Tobacco’s constitutional rights were infringed upon through what is known as “compelled speech,” the opposite of censorship, which is what generally happens in free speech cases. In addition to attempting to force tobacco companies to put out specific messages, the FDA’s actions were also seen as pure propaganda. The grotesque images moved far past a fact-based objective warning and landed solidly in the arena of a government agency telling the public explicitly not to buy the product.