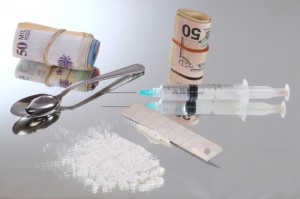 The script for Sparkle was written to very closely mirror the life of singer Whitney Houston, whose final Hollywood role was to play the mother of young singers whose experience coming up in the music industry was so similar to her own. A cautionary tale about the dangers that can befall young women who attempt to achieve the heights of fame in the music world, Sparkle tackles a number of the temptations and pitfalls that often overtake young performers – including drug addiction.

Carmen Ejogo played one of the sisters of the main character, Sparkle, in the film, one of the daughters of Houston’s character. One of the story lines in the film is the drug addiction that Ejogo’s character develops. In an interview with the New York Post, Ejogo said that during filming, Houston took her under her wing and shared some very intimate details of her own experience with drugs and addiction in an effort to help Ejogo really bring the character to life.

Says Ejogo: “She was very open with me about her battles. I was quite shocked. She shared some very personal stories. She was willing to be totally vulnerable so I could understand what it was like. She wanted my character to be authentic, and she went there in order for me to be able to bring that to the screen.”

A Message to Up and Coming Singers

Houston had hoped that Sparkle would be a warning to young women who hope to make it in the music industry, and Ejogo shares that sentiment.

Ejogo said: “[Whitney Houston] was willing to be the example of what to avoid. She made this film for her daughter and for all girls to recognize the importance of not letting your light be dimmed by anything. To have gone through what she’d gone through, the public humiliation, and still have the guts to share that story is incredibly brave.”

Avoiding the Trap of Drugs and Alcohol

When you’re trying to make it in a competitive field like the music business, it can be easy to fall into the trap of addiction. Drugs and alcohol are everywhere and many may feel tempted to ease the stress of constant auditions and rejection with the illicit substances. If you feel that this is happening to you, your best shot is to nip it in the bud. Contact us now at The Orchid to learn how you can stop drug abuse and addiction before it ruins your shot at making your dreams come true.