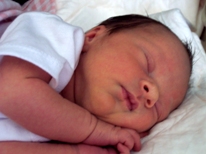 When a baby is in utero, drugs that the mother takes can pass through the placenta and reach the developing fetus. The placenta does not care if the drugs are legal, illegal, in large doses or small doses. It just filters whatever the mother ingests and passes most of it onto the baby. Some people may assume that if they are taking a drug approved by doctors that it can’t cause harm to them or their unborn child. This is a false assumption and it is important that all medications and supplements are doctor approved before a woman takes them during her pregnancy.

For many prescription drug addicts who get pregnant, there may be a false sense of security that because they aren’t using street drugs there is some margin of safety in their addiction, but hospitals across the nation are starting to see a surge in babies born addicted to their mothers’ prescription medications. The newborns must then go through withdrawals from the narcotics, a painful process known as Neonatal Abstinence Syndrome (NAS). Opioid medications such as Oxycodone, Percocet, and Vicodin are some of the most difficult for babies to withdraw from in their first days of life – and the most commonly seen addictions in newborns.

The American Academy of Pediatrics estimates that between 55 percent and 94 percent of children exposed to addictive prescription drugs during pregnancy undergo obvious withdrawals. Tennessee is one of the states hardest hit by the prescription drug epidemic. In fact, one facility, the East Tennessee Children’s Hospital, reports that almost 50 percent of all the babies in their neonatal intensive care unit undergo intense withdrawal symptoms from prescription drugs. These symptoms include:

The prescription drug problem in Tennessee is accelerating at such a rapid rate that between 2010 and 2011 the number of babies entering the world facing NAS increased two-fold. This is causing issues for the state’s social workers that must decide which babies to remove from their biological parents and who can safely care for them. With the doubling of NAS cases in one year, it is no wonder the number of kids in foster care has also increased by 50 percent. Past the immediate worry of proper love and care during infancy, doctors worry about the long-term ramifications for these babies as they grow and may possibly face learning, developmental, and behavior challenges as a result of exposure to prescription drugs before birth.

What actions do you think could reduce the number of babies exposed to addictive medications during pregnancy? All your ideas and opinions are welcome below.