The Depression of Gaming Addiction 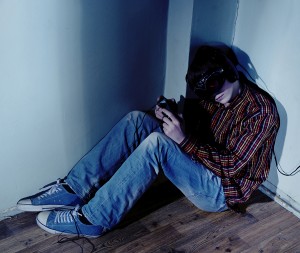 A severe dependence on video games or Gaming addiction is more serious than a lot of people give it credit. We as a culture are starting to become more attached to our technology, and in a way smartphones and social media are making it more noticeable, and opening our eyes to the concept of obsessive and compulsive relationships with the internet and video games, and how things like the internet and addiction relate to depression.

Experts estimate that more than 3 million Americans between the ages of 8 and 18 years old could be suffering from a serious video game dependency. And medical authorities are finally noticing.

Rebecca Collenen Christie may not sound too familiar, but she was a woman who was involved in one of the most disturbing tragedies related to Internet Gaming Disorder. Rebeccas Christie was sentenced in 2009 to 25 years in prison, after allowing her daughter Brandi to starve to death while she played an online video game.

Christie sat at her computer for hours at a time playing the fantasy role playing game ‘World of Warcraft’ as her 3 year old daughter slowly starved. The neglected toddler was so hungry that she reportedly ate cat litter, and upon being rushed to the hospital she only weighed 23lbs, just one pound and a half more than she had weighed the previous year.

Doctors who examined the badly malnourished girl said her ribs were protruding from her body, and ultimately prosecutors said Brandi had died from malnutrion and dehydration.

One welcomed sign of the medical world taking heed of this situation is that the latest edition of the Diagnostic and Statistical Manual of Mental Disorders (DSM) recently named this compulsive phenomenon as ‘Internet Gaming Disorder’, warning that such tireless and chronic online activity can result in clinically significant impairment or distress, while adding that certain neural pathways are triggered with gaming addicts just as a drug addicts drug of choice affects them.

The DSM does take note that Internet Gaming Disorder is breaching the domain of what are typically considered mental health disorders, but there has yet to be a more specific and effective medical model for diagnosing individuals. Need a more relatable example? How about we add weight to that with the estimation that there could possibly be about 1 million more diagnosably dependent gamers in America than cocaine addicts?

One Idea on Diagnosis

Dr. Douglas Gentile is one of the world’s leading experts on adolescent media addiction, and is a man who was once an avid sceptic himself who set out in 1999 to disprove the idea, and is now an advocate for educating the world to the dangers of Gaming addiction.

Gentile believes that video game dependency can be estimated the same way you measure other psychological conditions. Mostly diagnosis of compulsive gamers has been done by combining the criteria from diagnosing gambling addicts and substance abusers.

The disorder even exhibits typical addiction symptoms such as:

But Gentile understands the skeptics. He began his research on media addiction in 1999 “largely trying to show that it was wrong.”

Dr. Gentile’s early research was based on the question of ‘is depression the main problem for media addicts, and is gaming the symptom’? Gentile learned through tracking 3,000 kids for a period of 3 years that there’s a complex structure to pathological gaming and depression, not easily answered one way or the other.

When you get down to it, individuals with mental health problems or attention disorders are known to be more apt toward escapism. Habitual gaming is typically explained by gamers as a means to escape reality, just like drugs and alcohol.

Then the problem enters into this vicious cycle, as people who game consistently from a young age tend develop attention disorders and social anxiety. These things make them suffer at school and in personal relationships, which only intensify and multiply their mental health problems. Guess what that does? Make them game more to escape.

Thankfully the mental health and addiction treatment communities are working to raise awareness about the dangers of online gaming addiction, and making strides in future treatment. There is even an online video game addict support group Computer Gaming Addicts Anonymous (CGAA) where recovering addicts work together to support one another, much like other 12 step fellowships. Online gaming disorder has been a problem, so now we are starting to see more solutions.

Depression may be part of gaming addiction as much as it is any other. The characteristics and underlying causes can be disputed, but the point is that people take it for what it is, and that treatment for gaming addiction is considered as important as other addictions. If you or someone you love is struggling with substance abuse or addiction, please call toll-free 1-800-777-9588