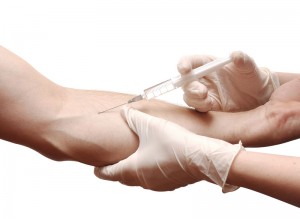 Twitter may be one of the downfalls of the young reality star, Jenelle Evans, of Teen Mom 2, but it’s certainly not the only one. For months, rumor and conjecture about whether or not the young mother was fighting a drug problem have been tossed around online, and she recently – if inadvertently – revealed the truth behind the stories in a tweet.

She tweeted: “I hate you kieffer!!!! why cant you leave my life alone and stay away from me..you got me strung out on heroin #BYE.”

The Kieffer she is referring to is most likely her ex-boyfriend Kieffer Delp, often on the show and part of the many problems that Jenelle has had in keeping her life together. But is her addiction his fault?

It’s a chicken and egg question. Which came first: the boyfriend or the addiction? In Jenelle’s case, it appears that she had drug abuse issues with marijuana prior to meeting the boyfriend who either introduced her to heroin or used with her and helped her to develop an abuse problem that turned into an addiction. While her relationships may indeed have played a part in the exacerbation of her addiction issues, she spoke plainly to her lawyer on camera for the show about her concern for her ability to avoid smoking marijuana as ordered due to her anxiety issues. In the end, it doesn’t matter how it began as long as she and other women like her get the treatment they need to stop.

Too often relationships play a large part in the development of a woman’s use of illicit substances and can be one of the obstacles stopping them from entering treatment. Some fear losing their partner while they are away and prioritize the relationship over their own health. While it is possible to maintain a relationship while in rehab, it’s impossible to continue to date someone who is actively using when you are clean and sober without relapsing yourself. In order for the relationship to survive, both people will have to stop drinking and getting high and then put in the work to build a strong and functional relationship together. This is a difficult process but not impossible to achieve. However, both people must recognize from the start that their first priority is not the relationship but their own personal sobriety.

Learn more about how to overcome the obstacles that often cause women to miss out on the opportunities provided by intensive drug rehabilitation when you contact us at Orchid Recovery Center today.