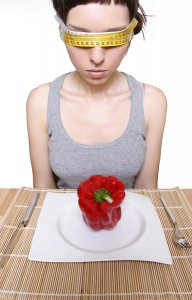 Body image, dieting, food and compulsive behaviors can all be warped into a mess of intense emotions and self-destructive habits that evolve into what commonly characterize eating disorders.The week of February 22 is considered National Eating Disorder Awareness Week (#NEDAwareness Week), and the National Eating Disorders Association (NEDA) has scheduled a variety of events specifically organized for bringing the reality of the issue as a whole to the attention of the general public, and to better educate the country on the symptoms and severity of these debilitating disorders to improve public understanding of the causes, and the treatment.

This year the NEDA is focusing on the importance of early recognizing of the diverse experiences of people personally affected by disordered eating, and early intervention in the activity before greater damage is done. Too frequently the signs and symptoms are overlooked as trivial habits by those who do not understand what an eating disorder really is, when all along many these same actions are early warning signs of eating disorders.

Each day during #NEDAwareness Week the NEDA set to target a different audience with information, education and helpful resources, enforcing the understanding that catching the signs and symptoms of an eating disorder as early as possible intervening during the development can significantly increase the odds of preventing the onset of a full-blown eating disorder, and it can lead to greater chances of a full recovery for those who are struggling.

Walk for What Matters

There have been several events set up this week to help spread this message, and the NEDA is set to host a walk in San Diego this coming Saturday, February 28, to raise awareness about these types of conditions; conditions that impact tens of millions of American men and women each year and devastate even more lives in their wake.

This is an annual walk that is being held this year at Liberty Station marks the end of National Eating Disorders Week, and this year the bar has been set high, with a fundraising goal of $25,000 for this one event alone.

The NEDA kicked off with the 4th Annual Orlando NEDA Walk on January 20th in Orlando, Florida and has continued with several events in several states every day. This week there are a still a lot of opportunities to get involved on the schedule, with various states offering different options such as:

And those are just a few of the dozens of events going on all over the country. You can easily find out what events may be going on near you by looking for the NEDA schedule online, and there are events currently posted all the way until March 5th.

The Ravages of Eating Disorders

According to the statistics presented by the NEDA the number of people suffering from eating disorders has been growing since 1950 with 20 million women suffering nationwide, but women are not the only ones who are struggling with eating disorders.

Anorexia and bulimia are the two most commonly known eating disorders that tend to come to mind when speaking on the subject, but those are not the only ones out there, and not the only target audience for the NEDA’s efforts. According to Ursula Ridens, a registered dietitian nutritionist, there are also other very serious eating disorders, such as:

In some cases people misuse certain medications to control their weight like stimulants, as well as laxatives and other supplements that are abused for unhealthy weight loss.

Not Just for Girls

It is true that more women are afflicted by and eating disorder, but the NEDA has made statements in an effort to remove that stigma, including that roughly 10 million men in the United States suffer from a clinically significant eating disorder, and that number seems to be on the rise with statistics showing that up to 43% of men reporting issues with their body-image. Ursula Ridens went on to state,

Binge-eating disorders are more common among men, but they are not immune to anorexia or bulimia. Men may also assume a mix of eating disorder behaviors such as restrictive or emotional eating. Ridens said,

“Men with eating disorders has been called ‘a silent epidemic,’ as it often goes overlooked and thought of as a woman’s problem, which we now know isn’t true,”

There are other disorders you may not notice, such as excessive nighttime eating and over-exercise.

For those with eating disorders even genetics can contribute to the development of this kind of affliction. There are often a variety of contributing factors, such as:

Ridens said there are also influences such as:

All these things can send messages saying we must look thin and flawless. Some would say however that awareness has finally made some impact on some of these companies, and that many are now actually working to promote healthier, more realistic body images.

For those suffering from eating disorders, there are options for effective treatment, such as day treatment programs and residential inpatient programs that offer more intensive support. Family therapy, eating disorder support groups and dieticians are often an advantage as well, but the point of #NEDAwareness Week all together is to let people who suffer know that they are not alone, and that recovery is absolutely possible.

Showing people the truth behind eating disorders is important, and giving people the opportunity to take some steps that could save their lives is essential. If you or someone you love is struggling with substance abuse, disordered eating or addiction, please call toll-free 1-800-777-9588