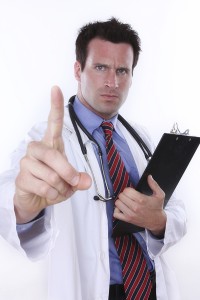 These are not just ramblings of a passionate feminist. This is the sad truth. Feminist critiques of modern medicine have long noted that, especially in cases where the cause of an ailment is not readily known, doctors will most likely default to a psychological explanation in women, when compared to male patients.

A recent study showed that younger women who have heart attacks hesitate to seek medical attention because they fear being labeled a hypochondriac. After all, theirs is a long-standing belief that stems back to Victorian times in which there seemed to be an epidemic of “hysteria” among women – and only women.

And, unfortunately, this fear is a justified one. One cardiologist admits, “In training, we were taught to be on the lookout for hysterical females who come to the emergency room.”

Heart disease is the number one killer of both men and women in the U.S. and yet it’s long been considered a “man’s disease.” But, consider this: when women, especially younger ones, have heart attacks, studies have shown that they are about twice as likely to die as their male counterparts—and, in fact, more than 15,000 women under the age of 55 do die every year as a result of heart attack.

But focusing on what individual women do—or don’t do—when they’re having a heart attack only proves to serve as subtle victim-blaming rather than encouraging a deeper look into a health care system that is failing women.

For decades, studies have attempted to tease out the various factors that may contribute to that significant gender gap. Recently, researchers at the Yale School of Public Health published a study looking at the cases of women under the age of 55 who were hospitalized for a heart attack. According to the results, the main takeaway is this: younger women may “ignore” or “dismiss” their heart attack symptoms, leading them to “hesitate” or “delay” seeking help, in part at least out of anxiety about raising a false alarm.

The reality of the situation is that it is more complicated than that and that gender bias plays out on multiple levels, both within and outside the medical system, giving us a grim picture of how being female affects women’s ability to get life-saving medical care in a crisis, such as cardiac arrest.

Many of the participants in the Yale study:

Unlike the “Hollywood heart attack” that we’re all used to seeing: the sudden onset of chest pain and shooting left arm pain. The fact is, those are heart attack symptoms in men, mostly, and women experience various different, “atypical” symptoms.

The fact that these symptoms are even called “atypical” indicates the gender bias. As mentioned above, heart disease affects men and women equally, so 50/50, and yet we only use male cardiac symptoms as a measuring stick, relegating women’s symptoms to the category of “other” and ‘not normal.” The main problem with this is that heart attacks go unnoticed in women because their so-called unusual symptoms tend to be attributed other health problems.

Women, Doctors, and Heart Disease: The Data is Shocking

Even though more women than men have died each year from cardiovascular disease since 1984, less than one in five doctors, including primary care physicians, OB/GYNs, and even cardiologists, knew that, as recently as a 2005 study.

In 1996, a national survey revealed that two thirds of doctors were completely unaware of any gender variations in symptoms. Last year, a poll of physicians commissioned by the Women’s Heart Alliance found that only about half agreed that there were differences between men’s and women’s hearts.

It’s alarming that doctors’ misconceptions basically just mirror the ignorance about women’s heart disease in the general medical community. Doctors tended to underestimate their female patients’ personal risk for heart disease and to recommend less preventative measures to them than they did with their male patients.

If you or someone you love is struggling with substance abuse or addiction, gender-specific treatment is a highly beneficial way to treat the substance-related issues as well as the underlying issues of that substance abuse. The Orchid Recovery Center offers an all-women’s drug and alcohol treatment program that focuses on women’s health and well-being. Call toll-free 1-800-777-9588 today.