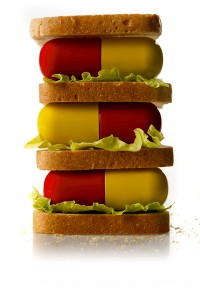 Eating disorders have already been recognized by medical professionals for some time, specifically the mental health professionals. These afflictions have been identified as a wide range of irregular eating behaviors that include:

There is also something called “disordered eating”, which can include behaviors which reflect many of the symptoms of other eating disorders such as anorexia, but not all of them.

But now one drug may bring us to wonder if we can actually become able to fix an eating disorder, or if the mistake of our society is to think we can just throw pills at our problems. Last month the Food and Drug Administration (FDA) approved the ADHD drug Vyvanse to be used for treating binge-eating disorder, so some believe it could be very possible either way.

Binge eating disorder (BED) is the most common eating disorder in the United States. BED affects 1% to 5% of Americans, according to the National Eating Disorders Association. It can lead to or contribute to obesity, and when they say an ‘episode of binge-eating’, it has been described in the DSM-V as:

“eating, in a discrete period of time (usually two hours), an amount of food that is definitely larger than most people would eat in a similar period of time under similar circumstances.”

Changing the Menu for Medication

This is a big shift in the strategy for eating disorder treatment, because now for the first time the FDA has actually approved a medication to treat those suffering from an eating disorder.

Vyvanse is a central nervous system stimulant. It was approved in 2007 to treat ADHD in people 6 and older. Back in 2007 the drug Vyvanse itself was first approved to treat attention deficit hyperactivity disorder (ADHD). But now, according to the FDA, it is considered an effective opportunity to aid in curbing episodes of binge-eating.

In clinical studies involving 724 people, those on Vyvanse binged fewer days each week than those taking placebos. Yet there are still some who are not convinced that a drug can treat binge-eating disorder.

The FDA stated Vyvanse was approved to treat BED after being tested in 2 clinical trials. Those studies were sponsored by Shire, the drug’s maker, using 724 people with moderate to severe versions of the disorder. But even though they claim this is a promising answer to the BED problem, they admitted they have no clue why? Sandy Walsh from the FDA office of media affairs wrote in an email,

“We have no direct evidence about how Vyvanse works in BED. The exact mechanism of action of the drug in reducing the symptoms of BED is … unknown.”

But what is known is that Vyvanse does come with side-effects, one of them being the possibility for abuse, along with several other health risks including:

This brings one to wonder how much help this drug can really be to those already dealing with a compulsive health issue.

Experts against this Idea

Not everyone is as confident in Vyvanse as the drug company making it.  Melissa Gerson, who is the clinical director of Columbus Park Collaborate, an outpatient treatment center in New York for people with eating disorders, spoke up about her concerns with trying to sell a stimulant as a one-stop-shop for fixing eating disorders. Gerson said,

“I just don’t want there to be the message that there’s a simple pill you can take. There are longstanding behavior patterns that need to be explored and shifted.”

Melissa Hopper, a psychologist who is an expert in treating binge-eating disorder said,

“Binge-eating disorder is a complex”

She also insists that the most effective method of treatment is done through therapy, not by taking pills. Another expert to speak out against the idea of feeding Vyvanse to BED sufferers is a New York psychotherapist who specializes in treating eating disorders named Emily Rosenthal, who added to the argument that patients with eating disorders often struggle with other issues, such as:

Without addressing these issues and problematic behaviors that cause binge-eating disorder, most experts believe that it is very unlikely to achieve any sort of real long-term recovery from these eating disorders. Like most addictions or compulsive disorders, it is not as simple as popping a pill and calling it a day. A drug like Vyvanse stimulates the dopamine center of the brain which regulates pleasure sensors. This causes a feeling of euphoria and a loss of appetite, making it a sought after solution for those who seek a quick-fix to their dieting struggles. But this does not at all make it a healthy solution.

Of course medications that are stimulant based are going to curb an appetite. Some would say if we want to sell dangerous stimulant drugs as cures for eating disorders we might as well throw cocaine and meth in the mix too. All these drugs have a nasty habit of tearing up your body, and helping you starve yourself. The most effective ways of dealing with binge-eating disorder are the combined efforts of therapies such as cognitive behavioral therapy (CBT), along with intensive outpatient programs (IOP) or nutrition counseling.

Eating disorders are more than a one dimensional issue. These kinds of disorders require more than a pill that makes you less hungry, there has to be more done to improve on the individuals self-image, coping skills, and other aspects of their recovery. Handing someone a pill who already has issues with compulsion can be like handing a gun to someone who plays too much with knives, someone is going to get hurt. If you or someone you love is struggling with substance abuse or addiction, please call toll-free 1-800-777-9588