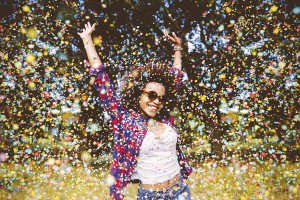 The past 365 days have brought us plenty of sad days and plenty of sunshine. 2014 has been an incredible year for innovations and inspiration on many levels, and in many ways some wonderful women have made a serious difference.

In a society that is growing and learning we are lucky to have such awesome mothers and daughters, sisters and friends that enrich our lives and the evolution of our world. So here are 11 amazing moments for women in 2014 that probably flew under your radar.

1. Maisie Williams Called Out the Industry

This young “Game of Thrones” actress has made quite a bit of waves with a dynamic character, and this year she showed some strong character of her own where a tabloid tried picking on her for wearing a dress on 2 occasions, saying:

Truer words need never be spoken Maisie Williams. It is a nice dress. The starlet took her stand at a young age for her right to fashion faux pa’s.

The first EVER female Air-Guitar Champion in the UK was crowned after a furiously head-banging final at the Boston Music Room, in Junction Road, Tufnell Park last month. Charlotte ‘Sue’ Clarke stated:

“It feels absolutely amazing to win because ever since I started I’ve wanted to be the first female champion.”

The newly-crowned champion Charlotte ‘Sue’ Clarke will now fly out to Finland to represent Britain in the World Air Guitar Championships at the end of August.

3. The Woman With Eagle Feather

The Woman with Eagle Feather is actually Amanda Polchies. During a peaceful demonstration Polchies got on her knees to pray at an anti-fracking protest in New Brunswick, Canada.

Fracking is also known as hydraulic fracturing is a destructive process that corporations use to extract natural gas and oil from the earth. Simply by holding up a feather against an army of armed police, the woman was then turned into an internet icon.

An astounding 600 volunteers took part in the “Art+Feminism Wikipedia Edit-a-Thon” added in the names of female artists who they felt deserved to be recognized on the site.

This took place over one Saturday in February at 31 different venues. The event, epicenter was the New York art and technology center Eyebeam, is part of a larger movement to upload content to Wikipedia in a proactive manner.

Professor Maryam Mirzakhani, an Iranian mathematician working in the US, was recognized with this awesome award for her work on complex geometry.

In becoming the very first female medallist, Prof Mirzakhani – who teaches at Stanford University in California – ends what has been a long wait for the mathematics community.

6. New Women’s (and Men’s) Record for Most Consecutive Marathons

Amy Hughes 26-year-old sports therapist, from Oswestry in Shropshire recently broke the record for most consecutive marathons, in both genders!

The journey started in Chester on 6 August and finished in Manchester on 27 September. With a marathon each day, each 26 miles and 385 yards long, Amy Hughes has run just over 1,389 miles in all. Hughes said after the 53rd run:

“If someone suggested running a 54th marathon I probably would to be honest,”

I refuse to run the vacuum cleaner, let alone a marathon, so well done!

13 year old competitive surfing star Olive Bower recent wrote a very direct and inspiring letter to the editors of “Tracks” Magazine about her opinion on the way women were depicted in the pages of an issue she had read at a friends home. In the letter one part that stands out is:

“These images create a culture in which boys, men and even girls reading your magazine will think that all girls are valued for is their appearance.

My posse of female surfers and I are going to spread the word and refuse to purchase or promote Tracks magazine. It’s a shame that you can’t see the benefits of an inclusive surf culture that in fact, would add a whole lot of numbers to your subscription list.”

Clearly this young woman has a passionate and independent mind, and she has proven she knows how to give the media a piece of it.

Bayan Mahmoud al-Zahran is the name of a Saudi Arabian women who this year opened the first female law firm in the nation, where she plans to represent women, and bring women’s rights issues into the courts in her country.

In Saudi Arabia all women are banned from driving. If anyone defies this ban, they are punished severely. Loujain Al Hathloul is a 24 year old woman who decided to make an effort at convincing authorities to make a change by driving to the Saudi border from UAE in a car she owns and a valid UAE driving licence on November 30th.

But upon reaching the Saudi border and demanded to be let through, her passport was confiscated and she was made to wait in the car overnight. This woman communicated with her friends and supporters that she was cold and hungry.

Maysaa Al Amoudi, a Saudi woman journalist based in Dubai, took the long drive to get supplies to her. When Mayassa arrived at the Saudi border, she was ordered to park her car and wait. An hour later, both Loujain and Maysaa were ordered to drive their cars through into Saudi soil. As soon as they did, they were arrested.

#Women2Drive Campaign and several other petitions have since ignited a movement to enforce the idea of reforming this outdated practice, but some experts say the movement is up against society itself.

10. Afghan Women Show Up to Vote

Defying Taliban threats, Afghan women poured into the polls in such high numbers that ballots were running out in some places by midday. At least one person was killed, several others injured and more than 200 polling stations closed at the last minute because of security threats.

Still many women showed up to propel the ballot turnout to 7 million. Thanks to multiple levels of tight security, and with Kabul virtually shut down for days before the election, it seems to have prevented any major Taliban attacks.

This surprising survey sparked an outrage across Brazil, with tens of thousands taking to the internet and social media to express their anger and disgust.

In response to the survey’s findings, Brazilian journalist Nana Queiroz created a Facebook page with the hashtag: #NãoMereçoSerEstuprada which translates to: #IDon’tDeserveToBeRaped.

She then invited people to post selfies with the hashtag, and within 24 hours over 32,000 women — and men — joined the page. Movements much like this one have been taking place all over the country. Demonstrations and protests have been taking the fight against sexism and sexual assault or misconduct to the forefront where the world can see the reality.

These are only a few instances of how 2014 has experienced women all over the world, across the globe and right here at home, that are changing the world in ways that especially women can appreciate and be empowered through. As always, women hold up half the sky, and this year that have raised the roof on some important topics. Still women suffer greatly in active addiction, and stigma is still strong. If you or someone you love is struggling with substance abuse or addiction please call toll-free 1-800-777-9588