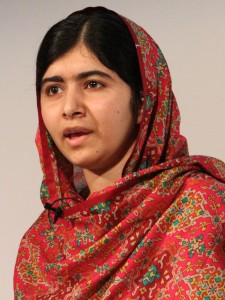 Pakistani education activist Malala Yousafzai, at 17 years old, is the youngest ever recipient of a Nobel Prize. She shared the honor with Kailash Satyarthi, an advocate for Indian children’s rights and an activist against child labor.

Ms. Yousafzai and Mr. Satyarthi were jointly awarded the 2014 Nobel Peace Prize “for their struggle against the suppression of children and young people and for the right of all children to education”.

Winning the Nobel Prize also involves an award of prize monies; the two have split the $1.4 million prize.

At the ceremony, Ms. Yousafzai delivered a moving speech, which earned her a standing ovation from those in attendance. In fact, it was reported by Nobel organizers that there have never been such standing ovations or so many accredited journalists.

“I am here to stand up for their rights, raise their voice. It is not time to pity them. It is time to take action so it becomes the last time that we see a child deprived of education.”

Ms. Yousafzai said she was dedicating the prize money to the Malala Fund, “to help give girls everywhere a quality education and call on leaders to help girls like me…”

In October 2012, Ms. Yousafzai was targeted by the Taliban for her efforts to expand educational rights to girls and women in her home country. She survived being shot in the head by Taliban gunmen because she was outspoken in campaigning for girls’ educational rights. She now resides in the UK.

She has said, “I feel much stronger after the attack that I endured, because I know, no one can stop me, or stop us, because now we are millions, standing up together.”

“I will continue this fight until I see every child in school,” she added.

We all have overcome obstacles in life and you are stronger than you think. If you or someone you love is struggling with substance abuse or addiction, help is available and it’s never too late to turn your life around. Recovery is possible. Please call toll-free 1-800-777-9588 to speak with an Addiction Specialist. We are available day or night to take your call. You are not alone.