Christmas is only a few days away and I guarantee everyone is getting pretty excited to get to spend time with their family and loved ones. We all have different Christmas traditions that we do each year with our families. One of my favorite traditions is watching all my favorite Christmas movies with my family. I’m sure most of you have either seen or heard of these so I made a list of what I thought were the 10 best Christmas movies ever.

This film is about a 9 year old named Ralph “Ralphie” Parker who only wants one thing for Christmas: a Red Ryder BB Gun with a compass in the stock and this thing which tells time. While using many different schemes to persuade his parents to get him this gift, he repeatedly bumps into objections from others saying “You’ll shoot your eye out.”

10 Best Christmas Movies Ever: The Grinch

Based on the book by Dr. Seuss, The Grinch takes place in the city of Whoville where all the Who’s celebrate Christmas with much cheerfulness and joy. The only one who isn’t happy about Christmas is the Grinch, who because of this everyone dislikes. It’s a heart-warming tale of the Grinch meeting Cindy Loo Who, attempting to destroy Christmas and in the end finding the true meaning of Christmas.

Elf is a hilarious film about Buddy, who was raised in the North Pole and lives with Elves and works at Santa’s workshop. He finds out that his real Dad lives in New York City and goes on an adventure to the city to find him. This movie is great if you want to laugh a lot and get in the Christmas spirit.

The Santa Clause is about a man named Scott Calvin who is divorced and lives in Chicago and has a young son named Charlie. On Christmas Eve they are awaken by the sound of reindeers on the roof and as Scott calls out to him the man falls and leaves behind his clothes. Scott Calvin then proceeds to put on the Santa outfit and from there things just get weirder as he slowly turns into Santa Clause. This is a very cute family movie.

Home Alone 1 and 2 are both based on an 8 year old named Kevin McAllister who is left behind and lost on Christmas and trying to take care of himself while fighting off two criminals who are after him. He ends up realizing how much he really wants to be with his family on Christmas as opposed to spending it alone, like he thought he wanted.

This Christmas movie is based on Charles Dickens’ A Christmas Carol. Frank Cross, who is played by Bill Murray, is a pessimistic television programming executive. He has found great success and wealth, but only by becoming cold-hearted and unpleasant. He is visited by the ghosts of Christmas past, present and future in this film to discover that he needs to change his ways to prevent a horrible and unhappy future. 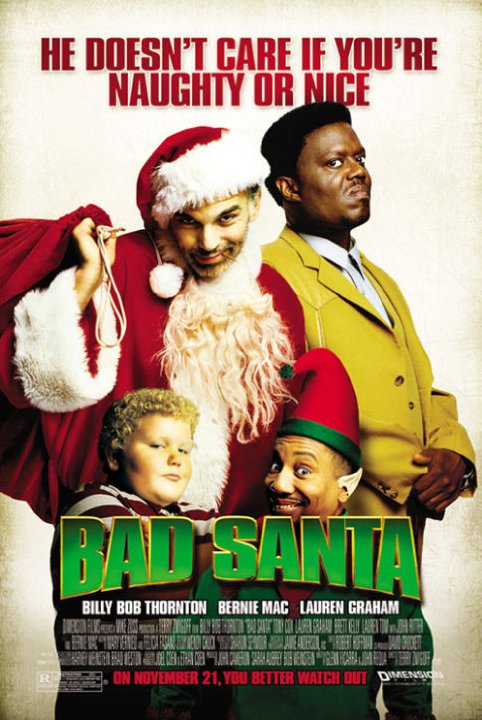 This movie is based on Willie and Marcus who are two professional heist men who dress as Santa Clause and an elf for the department store. They devise a plan to rob the safe of the store on Christmas Eve night and have been doing this for years, except this year Willie’s alcoholism is getting worse and he befriends a young boy named Thurman. This movie gave me a lot of laughs.

10 Best Christmas Movies Ever: The Nightmare before Christmas

Tim Burton’s The Nightmare before Christmas tells the story of Jack Skellington, a being from “Halloween Town” who opens a portal to “Christmas Town” and decides to celebrate the holiday, with some shameful and comical consequences.

This movie is about realizing the true meaning of Christmas and ignoring all the commercialized nonsense of it all. The Peanuts star in a Christmas play directed by Charlie Brown and end up loving this small little Christmas tree that Charlie Brown picks out.

10 Best Christmas Movies Ever: Miracle on 34th Street and It’s a Wonderful Life

These two movies are a lot older than the others but are definitely Christmas classics that are worth seeing, as well. Especially if you are into vintage and black and white movies, you’ll love these!

There are so many Christmas movies I couldn’t quite name of all them. But whatever it is that you enjoy doing on Christmas, having a wonderful time with your family and enjoying this holiday season! If you or a loved one is struggling with substance abuse or addiction, please call toll free 1-888-672-4435.