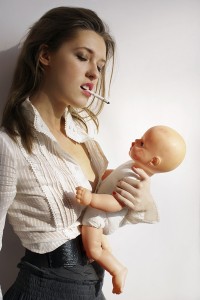 By now it’s well-documented and pretty much general knowledge that cigarettes are bad for your health and the health of children and others who are exposed to the smoke you’re producing when you smoke. That last part describes “secondhand smoke,” and it’s just as bad as firsthand cigarette smoke; so much so that there are strict regulations about where people can smoke, especially when it comes to public spaces. The most vulnerable of which are infants and toddlers.

Now, researchers are looking into what’s being called “thirdhand smoke” – the exposure to someone else’s smoky home, clothes, hair, or body which risks your baby’s health, too. Therefore, being a non-smoker isn’t enough; your child can experience these risks if you spend time with a smoker.

Did you know that, when a cigarette burns, nicotine is released in the form of a vapor that collects and condenses on indoor surfaces where it can linger for months?

A newly released study published in the Proceedings of the National Academy of Sciences has this to say about thirdhand cigarette smoke and its potential for harm:

“Research has documented the association between smoking in the home and persistently high levels of tobacco toxins (which remain) well beyond the period of active smoking.  These toxins take the form of particulate matter deposited in a layer onto every surface within the home; in loose household dust; and as volatile toxic compounds that put off gas into the air over days, weeks, and months.  Smoking indoors on 1 day thus exposes people to tobacco toxins within that space in the future. We use the new term “thirdhand” smoke to name this complex phenomenon and define it as residual tobacco smoke contamination that remains after the cigarette is extinguished.”  The article goes on to state, “Given the rapid sorption and persistence of high levels of nicotine on indoor surfaces—including clothing and human skin—this recently identified process represents an unappreciated health hazard through dermal exposure, dust inhalation, and ingestion.  These findings raise concerns about exposures to the tobacco smoke residue that has been recently dubbed “thirdhand smoke.”

If you are a smoker, when nursing or simply just holding your baby, they can absorb hazardous toxins from skin-to-skin contact. Being a non-smoker isn’t enough: even if you don’t smoke and your house is smoke-free, you could still be exposing your child to these toxins. If you have contact with someone who smokes, simply changing your clothes or taking a shower before you pick up and breast feed your child will not prevent the transmission of these toxins to your nursling. That’s because you have absorbed the toxins into your skin and now your infant is absorbing them via direct skin to skin contact with you.

Exposure to cigarette smoke can impact a child’s health to the extent of causing years of asthma attacks, pneumonia, and bronchitis, which leads to scar tissue on the child’s lungs. This, in turn, could lead to adulthood chronic respiratory problems.

You can avoid thirdhand smoke by avoiding all contact with cigarette smoke. Visiting a smoker’s home can put you and your child at risk.

If you are struggling with any substance or compulsive behavior and think you need help to stop, we are a free phone call away. Call toll-free 1-800-777-9588 to speak with one of our caring and compassionate Addiction Specialists who are available day and night and who can answer your questions.