Teens And Myths About Prescription Drug Use

Teens often get the notorious reputation that they know it all.  Unfortunately, even well-meaning teens can hold some dangerous beliefs.  A significant amount of teens have some very misleading beliefs about prescription drug use.  If you have a teen in your family, please read on to learn more about these myths.

Everyone Has Done Or Is Doing Prescription Drugs 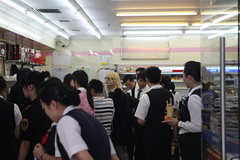 Children and teenagers often misrepresent how commonly some activities are done, especially among their peers.  They often use the words “everyone” because that’s what it may seem.  They sometimes fail to predict that almost always there are some kids who choose not to participate.  Not everyone has sex before they graduate from high school.  Not everyone will end up having a date to the prom.  And not everyone will do drugs.

This assumption of “everyone” doing it is often part of the peer pressure either directly put on kids by others or taken on by themselves.  More than just about anything, teens want to fit in somewhere.  If they perceive that “everyone” is or has at some point tried prescription drugs, they may feel like they need to as well to be part of “everyone”.

Prescription Drugs Are Not As Dangerous As Illegal Drugs

According to a recent study on teen drug use, four out of ten teens believe that prescription medication is much safer than illegal drugs.  What an astounding misbelief!  Simply because it is prescribed by doctors, a greater sense of safety is assumed.  What teens fail to recognize is that these prescription medications are all in the same family of narcotics that heroin is.  It may look different and might not be injected, but the strong addictive nature is absolutely there.

Teens are especially susceptible to addiction because of their generally less stable emotions and their body chemistry.  This myth of safety surrounding prescription drugs can get teens hooked before they realize anything is happening.  Drug treatment may be the only way to stop the addiction from possibly killing them.

Prescription Drugs Are Not Addictive

Even though prescription medications are generally narcotic in nature, almost 30% believe they are not-addictive.  Again, an astounding assumption that could be based on simply not understanding the active ingredients in prescription pain pills.  This belief may also come from the experience of seeing friends try pills and not appear to be addicted.  Perhaps they only see a fraction of the time their friends take pills, which could lead to a misconception that these teens only use once in a while with no addiction.

The teens actually addicted to the drugs may minimize their use to others as well, either not understanding or not wanting to admit that they are addicted.  This belief may also stem from the previously discussed belief that prescription medication is simply safer than illegal drugs.

Myths About Prescription Drugs Can Lead To Drug Abuse

It’s true that a teen may use prescription drugs a few times and not become addicted.  However, prescription drug use is much more common now than it used to be.  So many adults are being given prescriptions, teens are able to get their hands on them much more easily.  A teen using prescription pain medication is at risk for addiction and may end up needing drug treatment.  Narcotic medication can be very difficult to stop using without professional help at a drug rehab center.  Your teen needs to know the truth about prescription medication.  Tell them the facts before they go too far with prescription drugs.