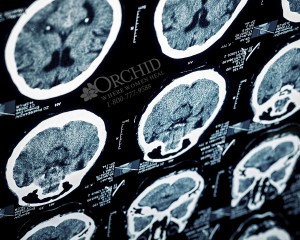 Crystal meth is a dangerous and extremely damaging illicit drug, with many immediate and long term effects, some of which are dealt directly to the brain. A new study published by researchers from the University of Sydney in Australia has revealed more detail as to how the methamphetamine-induced sensitization of the brain works, and that the impact bares a striking resemblance to the mental illness schizophrenia.

By examining alterations to the prefrontal cortex, the researchers were surprised to find the neurological changes induced by methamphetamine use to be extraordinarily similar to the brains of schizophrenics.

The prefrontal cortex is the region of the brain that has been implicated in planning complex cognitive behavior, personality expression, decision making, and moderating social behavior. Destruction of certain parts of this region results in deficits in concentration, judgment, and problem solving abilities, while destruction of the orbital (frontal) lobe results in inappropriate social behavior.

The structural damage and protein alterations most commonly seen in patients who suffer from schizophrenia appeared in the brain after methamphetamine-induced sensitization, which seems to suggest that using crystal meth is almost like experiencing self-inflicted schizophrenia.

To be clear, schizophrenia is a mental disorder often characterized by abnormal social behavior and failure to recognize what is real. Common symptoms include:

Published in the Journal of Proteome Research, the definitive concentration of the recent study was more focused on the implications for the maintenance of psychotic disorders, and not really on methamphetamine treatment. A proteome is the entire set of proteins expressed by a specific organism at a certain time.

More specifically, a proteome is the set of expressed proteins in a given type of cell or organism at a given time under specifically defined conditions. By examining the proteome layout in the prefrontal cortex, damage done by genetic psychotic disorders or external abuse factors like drugs and injuries can be gauged.

In other words, watching the reaction of these proteins in the brain when using drugs, the researchers were able to compare the reactions to the brain activity present in certain mental disorders.

As with most studies the Australian researchers worked with test rats. The researchers found that repeated administration of methamphetamine to the test rats led to a progressive increase in brain activity in the form of a behavioral sensitization. Such a behavioral sensitization is similar to the fundamental neurochemical changes that take place in traditional psychoses like schizophrenia, and these behavioral changes are the direct result of alterations to the prefrontal cortex of the brain.

The initial intensions of the current study was to investigate changes to protein expression in the prefrontal cortex, specifically in the male test rats, as sensitized to methamphetamine. Surprisingly 20% of the neural proteins affected by the methamphetamine have previously been implicated in the neurobiology of schizophrenia.

From synaptic regulation to mitochondrial function, the changes in the brain caused by methamphetamines had only been seen before in the brains of schizophrenics. This means a great deal for the future treatment of those with schizophrenia, as treatment can now be improved by avoiding the stimulation chemically associated with methamphetamine use.

As far as those struggling with an addiction to abusing crystal meth, and possibly other stimulants with effects mirroring those of methamphetamine, it should be a real eye opener to compare the way that this kind of drug effects the brain chemistry in such an important part of the mind that delegates personality to a mental disorder that can be terribly debilitating.

Drug abuse claims lives every day, and those who do not die often experience different degrees of long lasting damage to their body and mind. Sometimes we have no clue the extent of damage a drug has done to us until it is too late, but it is never too late tot recover. If you or someone you love is struggling with substance abuse or addiction, please call toll-free 1-800-777-9588