Study: Men Really Do Look at Women’s Bodies More Than Their Faces 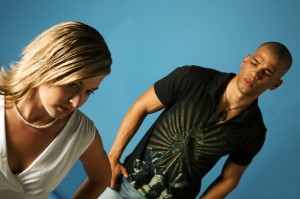 Common sense and experience has me think: “well, yeah. It doesn’t take a rocket scientist to figure this one out.” And, according to a new study that used eye-tracking technology, we can actually prove what many women have long observed: that men really do look at women’s bodies more than their faces.

As a curvy woman – I have the body type of the 1950s pin-up girl – I definitely get a lot of looks and even if I don’t see the gazes, I can certainly feel them.

Until now, we didn’t have evidence people were actually doing that to women’s bodies,” she says. “We have women’s self-reports, but this is some of the first work to document that people actually engage in this.” The eye-tracking technology provides “more objective measurements” than do questionnaires, which are subjective.

Women Do It, Too

But it’s not just men who do it — the study found that women look at other women’s bodies, too. The findings showed that both sexes fixed their gaze more on women’s chests and waists and less on faces. I know that I “check out” women as much as I do men. For me, it’s a more of a comparison thing. Like many other women, I experience body image issues, from time-to-time. When I look at other women, it’s mostly to see what I would like myself to look like. Also, it’s an appreciation of beauty thing.

Why We Do It

Lead author and social psychologist Sarah Gervais of the University of Nebraska-Lincoln attributes it to this: “We live in a culture in which we constantly see women objectified in interactions on television and in the media. When you turn your own lens on every-day, ordinary women, we focus on those parts, too.”

She adds that there may be something to do with evolution behind this behavior, as well. Men may be drawn to more shapely women for childbearing — while women may be checking out their competition, she suggests. As a heterosexual womanso perhaps the theory of checking out the competition is accurate

The Study: Men Really Do Look at Women’s Bodies More Than Their Faces

The study participants included 29 women and 36 men who were outfitted with the eye-tracking system, which measures in milliseconds how long the eyes are fixed on certain spots. Their gazes reacted to photographs of the same 10 women – only women’s bodies were viewed by the study participants – each with three different digitally manipulated body shapes: curvaceous, not curvaceous and in-between. Both sexes fixed their gaze longer on the chests and waists of the women and less on their faces. The pictures of the bodies with larger breasts, narrower waists and bigger hips often prompted longer looks.

This study is significant in that, up until now, there has been a lot of research on self-objectification, but only recently has attention turned to perceptions by others. Eye-tracking studies are an interesting way to look at objectification, which amounts to viewing women as objects.