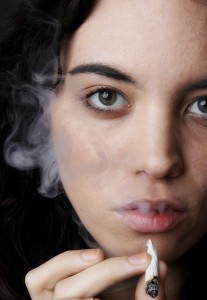 During her first day of confirmation hearings for the nomination of taking up the mantle as our new attorney general, nominee Loretta Lynch gave answers that seemed to pretty much follow the lead set by President Obama and his administration as far as opinions on policy, however that all came to an end when she was asked about the prospect of marijuana legalization, and whether she supports this new age of weed reforms.

Lynch actually revealed when asked by Alabama Republican Senator Jeff Session that she does not support marijuana legalization, and she does not share President Barack Obama’s views on marijuana as a substance during that confirmation hearing, which was held on Wednesday.

Lynch’s answers had mostly been aligned with President Obamas political position during previous exchanges with members of the Senate Judiciary Committee. Lynch offered a comparatively mirrored opinion on most issues including:

Then came the part of the Q&A that showed some real contrast. Senator Sessions asked Lynch directly is she supported the legalization of marijuana, and Lynch’s initial answer was short, sweet, and to the point. Lynch stated,

It seems looking at more of the continued conversation, Lynch has based her position in this debate off of a difference of experience compared to Obama. Session noted during this portion of the hearing that the head of the Drug Enforcement Agency (DEA) also disagrees with the idea of legalizing marijuana. Sessions went on to quote Obama from an interview last January, when he had stated,

“I smoked pot as a kid, and I view it as a bad habit and a vice, not very different from the cigarettes that I smoked as a young person up through a big chunk of my adult life. I don’t think it is more dangerous than alcohol.”

Regardless of pointing out the presidents earlier statements, Lynch did not budge from her firm stance opposing legalization of marijuana. When asked if she agreed with President Obama, Lynch replied,

” I certainly don’t hold that view and don’t agree with that view of marijuana as a substance. I think the president was speaking from his personal experience and personal opinion, neither of which I’m able to share. But I can tell you that not only do I not support legalization of marijuana, it is not the position of the Department of Justice currently to support legalization, nor would it be the position should I be confirmed as attorney general.”

Even though they may disagree on this point, there have already been actions taken to get the pot reforms moving. Marijuana is already legal in Colorado and Washington, and following the midterm elections this past November a states will be adding their names to the list of marijuana legalization including:

It has already been estimated that at least 10 additional states are considering legalizing marijuana in one capacity or another in the next two years. Some states such as New York have already been seeing some active politicians pushing for reform legislation. But Lynch is definitely not only in the opposition.

One exciting fact about Lynch’s nomination is that if she is confirmed as the new attorney general for the United States she will actually become the first ever African-American female to ever hold the office of attorney general. President Obama nominated Lynch to succeed Holder in November 2014.

Lynch will be succeeding Eric Holder if she is approved by the United States Congress. Eric Holder had announced his resignation in September, but he had stated he was “cautiously optimistic” about efforts in both Colorado and Washington to legalize and regulate marijuana use back in last April.

Attorney general Eric Holder allowed both Colorado and Washington to have their marijuana legalization laws go into effect once they had been approved by voters in the states, but he was simultaneously charted guidelines for federal prosecutors to reduce efforts to pursue small-time drug possession charges. Obama himself has stated he wants the strategy of handling drug possession and non-violent offenders to be shifted from prison to treatment.

Hopefully there is some middle ground to be found here, between marijuana reforms and politicians who are strongly opposed to the idea possibly coming into power. While the potential attorney general feels marijuana is a more dangerous drug than the president gives it credit, and addict or alcoholic should acknowledge the fact that a drug is a drug.

While the climate continues to change for addicts, it is becoming more obvious every day that getting help to escape from drug or alcohol addiction is essential. If you or someone you love is struggling with substance abuse or addiction, please call toll-free 1-800-951-615