Why It’s Important to Clear the Air 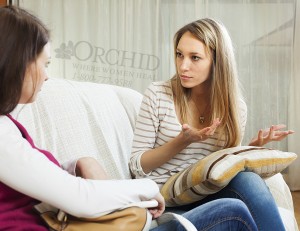 Clearing the air – getting rid of doubts or hard feelings – is necessary for being a healthy, well-adjusted adult. But, for those in recovery from the disease of addiction, it’s probably extra-important to be able to speak up when something someone says or does bothers us, or when we are the ones who have caused a miscommunication or hard feelings in others. In 12 step fellowships, this is what is addressed in Step 10: “Continued to take personal inventory, and when we were wrong, promptly admitted it.”

But, like I said, it’s also when we feel that someone else has done or said something that rubs us the wrong way. Of course, the first thing to do is to be willing to see what part, if any, you’ve played in the situation.

Now, clearing the air doesn’t mean brow-beating someone into submission – making them admit wrong-doing are getting them to agree when they simply don’t see it your way. If an argument or discussion clears the air and it gets rid of any hard or bad feelings between you and the other person, then consider it a success.

Clearing the Air vs. Letting It Go

First, as the saying goes, you have to pick your battles. Decide whether what’s happened really needs to be addressed or if you can resolve it on your own, within yourself. By that I mean, decide if it’s something you can let go of, perhaps after praying, meditating, or even talking about it with your sober supports and your sponsor. If we made a big deal over everything that happened in the course of a day, there’d be no time for anything else, like getting your work done. Also, I’m sure people would get sick and tired of you real quick.

However, if, after trying to resolve an issue through other means, as mentioned above, you still can’t let it go, then it’s time to consider clearing the air.

Be sure you know the difference between letting some ‘roll off your back’ and actually bottling it in. This is an important distinction. If you can let it go – and really let it go, then good. But, if you think you’ve let go of it but, in fact, it’s festering inside, this can lead to BIG trouble.

Why it’s important to clear the air

For anyone who bottles their feelings rather than talk about them – even if it means having to face potential conflict, resentments build. For those of us in recovery, allowing resentments to build spells Trouble – with a capital ‘T.’

You’ve probably heard it over and over again: resentments will take you back out (into active addition), in a word: relapse. This couldn’t be a more accurate statement. I know, for me, before I knew what recovery was and I was merely abstaining from alcohol and other drugs, whenever I would cop a resentment towards a coworker, my mom, a friend, or anyone else, my first thought was, “Well, I’ll just get f*cked up. That’ll show them!” As ridiculous as that sounds, it’s a pretty common mindset to those of us with the disease of addiction.  Hence the saying, “It’s like drinking poison and waiting for the other person to die from it.”

As scary as it might seem to confront someone, it’s in your best interest in the long run. Remember this saying:

“Everything you want is on the other side of fear.” I take that to mean, in this situation, that, as scary as it might be to speak up and confront someone, it’s well worth it if it means I’ll be able to sleep at night and be resentment-free.

If you are struggling with substance abuse or addiction, help is available. Women have specific experiences and needs when it comes to treatment and rehabilitation from drugs and alcohol. At the Orchid Recovery Center for Women, we recognize that recovery for women is unique from that of men. Please call toll-free to speak with an Addiction Specialist at 1-800-777-9588.