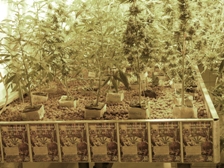 Two women in California were nicknamed the “marijuana grannies” by prosecutors when they were both arrested on charges of growing hundreds of marijuana plants in their home. Aleen Lam is 72 years old and her roommate, Virginia Chan Pon is 65. Together, the two were recently jailed due to their alleged misconduct. How did they get busted? Apparently, a neighbor called police to report a burglary at the women’s home. When police arrived, they saw the marijuana plants through the front door that had been kicked in, allegedly by burglars.

It didn’t take long for the police to get the search warrant they needed to get inside and get a better look around. It turns out that there were more than 800 marijuana plants plus $3000 in cash and an electrical bypass that let the two elderly women steal all the electricity they needed for grow lights without tipping off law enforcement.

Though illegal marijuana abuse and growers are hardly abnormal in the Northern California area, police were baffled by the sheer number of plants – and the age of the alleged growers. One police officer said: “This has not happened in the 34 years that I’ve been here.”

The charges for the two older women included maintaining a house for the sale of marijuana, possession of marijuana for sale, cultivation of marijuana, and theft of electricity. They pled not guilty on all counts, according to police, using court-appointed attorneys to assist them with their case.

Both women had a bail set at $100,000 each – neither were able to come up with that amount as of the latest reports, so both are women are still incarcerated.

What about the burglary that tipped off police to the presence of the home full of marijuana plants in the first place? The two men who were charged with the crime were found nearby and arrested. The men, in their mid- to late 30s, had thousands of dollars in cash in their possession as well as a significant amount of marijuana growing equipment. They, too, pleaded not guilty to their charges, counts of burglary and drug-related charges, and their bail was also set at $100,000 each – both men remain incarcerated as of the latest reports.

What’s the lesson here? So many! First, ignore the stereotypes of what a drug abuser, grower, distributor or dealer looks like. It’s doubtful that anyone is crossing to the other side of the street in fear when these two older women walk by. Second, this house was one of many in a typical, suburban middle class neighborhood – the days of assuming that marijuana is being grown out in the hills or in the inner city are over. Marijuana abuse is everywhere – and in the eyes of the law, no one is immune to prosecution.