Addiction is a problem that robs people of their lives.  And unfortunately, there are plenty of barriers for people needing drug treatment.  It seems that women have some problems unique to them.  It’s so important to understand these problems so treatment can be made more accessible.  Let’s take a look at these barriers a little more closely. 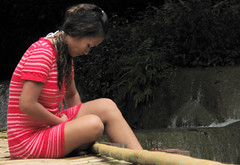 When an addicted woman has a moment of clarity, she may see that they need some kind of help with their drinking or drug use.  But just as quickly, she finds it difficult to get past some important question about her children.   Who would take care of them if she went to drug treatment?  Would she lose custody?  Would going to drug treatment be seen as abandonment?  What if she never saw her children again after leaving them?  This is a threat, another potential loss that cuts straight to the core of a mother’s identity.

A mother is who she is because she has children to care for.  If she doesn’t feel secure leaving them to take care of her addiction, it may be because she can’t handle the thought of such a severe loss on top of everything else.  Yes, she may lose her children if she continues drinking or using drugs, but the very practical and immediate problem of voluntarily leaving them stays in the forefront.  And in most situations, drug addicts and alcoholics focus more on the immediate moment than anything in the future.

Society has a negative perception of people with addictions.  This stigma seems to be worse for women.  When a woman has a drug or alcohol addiction, other assumptions go along with this stigma – being out-of-control, sexually promiscuous, and morally bankrupt.  These misperceptions grow internally for an addicted woman.  The shame and embarassment contributes to her low self worth.  This low self worth can be associated with the belief that no one would really want to really help her or that drug treatment would never work anyway.

Financial issues often hit women with children harder than most other segments of the population.  Women tend to have lower average wages or salaries than men.  Also, many single moms are on a single income with little or no help from an absent father.  These women may fear losing their job if their employer found out they had an addiction.  They may fear trying to get a job because they might have to explain that they have had an addiction (currently or in the past).  Simply having someone find out brings the possibility that the negative stigma could blast them yet again.

Not recognizing the need for drug and alcohol treatment – Women may see their alcohol or drug use as a helpful solution for their problem.  They may not consider that their use increases their health risks.  in other words, physical health symptoms may seem disconnected from their excessive substance use.  For example, weight gain from excessive drinking can put a woman at risk for diabetes, which can cause all sorts of physical difficulties.  The woman may make no connection between her use of alcohol and her gradual weight gain.  And she is likely to present physical symptoms to her doctor in this same unconnected way.

Changing the public perception of addiction is a tall order.  But reaching out to women and making drug treatment more manageable can be done.  These important changes are starting to happen.  Hopefully, drug treatment will become easier for women to reach for in the future.