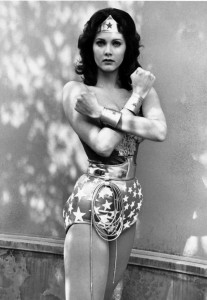 The Amazon warrior princess who wore a star-spangled corset and accessorized with indestructible gold bracelets has for a long time been a powerful punch in the arena of DC comics, and the name Wonder Woman says it all. Complete with the ‘Lasso of Truth’ and an invisible jet, this beautiful heroine has historically fought for love, peace, justice and equality as what is considered by most an icon of feminism.

Now behind all the superhuman heroism’s and glamorous battle-gear, Lynda Carter is actually very human, although she is still pretty super. Carter was best known for playing the character of Wonder Woman in the hit ’70s show, originally airing from 1975 to 1979 on the ABC network.

Now Lynda Carter is putting her heroine powers to use once again, opening up and speaking publicly about her battle with alcoholism and recently celebrating 18 years of sobriety! Sounds pretty wonderful to me.

Not only was Lynda Carter an actress and singer, but it only made sense that a woman to carry the name of such an empowered and admired character of the time be a former Miss USA! In 1978, Carter was voted “The Most Beautiful Woman in the World” by The International Academy of Beauty and The British Press Organization.

Carter says she didn’t even start drinking until her mid-20’s, which was actually well after her period of portraying the amazing Wonder Woman ended. However Carter admitted that her drinking problem was very “gradual” and that it had slowly begin to take over her life.

Carter was first married to Ron Samuels, her manager at the time. After the marriage ended in 1982 her drinking escalated after marrying second husband Robert Altman in 1984 and moving from Hollywood to Washington, D.C. Carter recently stated,

“Alcoholism is an abyss [and] you are terrified of the addiction. You just can’t stop. The disease has taken over [and] it is not a matter of having willpower. It happened over a period of time. It’s not like methamphetamine or heroin, where you get hooked and that’s it. But … over a period of time you begin to crave it.”

The phrase “emotional difficulties” was how she described what she was experiencing in her first marriage that Lynda Carter said she was trying to avoid with excessive drinking. But beyond the behavioral or personal motives, Carter said she believes in a genetic predisposition to alcoholism, which in her case she says only intensified the issue for her.

Like any good alcoholic, she was letting alcohol destroy relationships and alienate her from her loved ones. Even more honest of an alcoholic was that she admitted she was not sure if she’d ever be able to stop.

“I wasn’t really present for my two children, though my kids never saw me out of control. When I had a drink, I couldn’t stop. My liver doesn’t process alcohol until I’ve had three drinks. Then I’d fall off the cliff or under the table. It’s just devastating.”

Finally the day came where some emotional leverage was created to drive a wedge between her and her alcoholic drinking as one day her husband began urging of her to stop drinking for the family, especially for their children, and Carter entered rehab and sobered up.

Back in 2008 Carter did an interview where she stated that rehab taught her the best measure of a human being is,

That seems to show she has a pretty decent handle on what it means to be an active and caring member of the family she was fighting to get sober for. Carter has stayed sober since treatment and seems to consider herself fully recovered.

Now the Amazon warrior princess who has stood equal to Batman and Superman to fight for the Justice League is hoping to serve as an inspiration for others who are fighting their own addictions. Carter says,

“Now I’m focused on health, not perfection. I don’t want to be a weak, sick 90-year-old. I try to help others and I’d like to take the stigma out of alcoholism, but I don’t struggle with it.”

While the forces of evil may no longer reside in the bottle for Lynda Carter, and there may not be a supervillain named ‘Stigma-Man’, she is still aware of its presence in the lives of others, and now that she has her family, she is hoping her story can help others to find theirs again.

Lynda Carter may have passed the Wonder Woman torch to Gal Gadot, but 18 years sober she is still fighting for justice, peace, love and equality. So there is no taking the ‘Wonder’ out of this woman.

Sometimes all it takes to be a hero is the willingness to admit your faults, and to accept the help to change. Even a hero needs help once in a while, and every woman can be a wonder woman if she wants. If you or someone you love is struggling with substance abuse or addiction, please call toll-free 1-800-777-9588