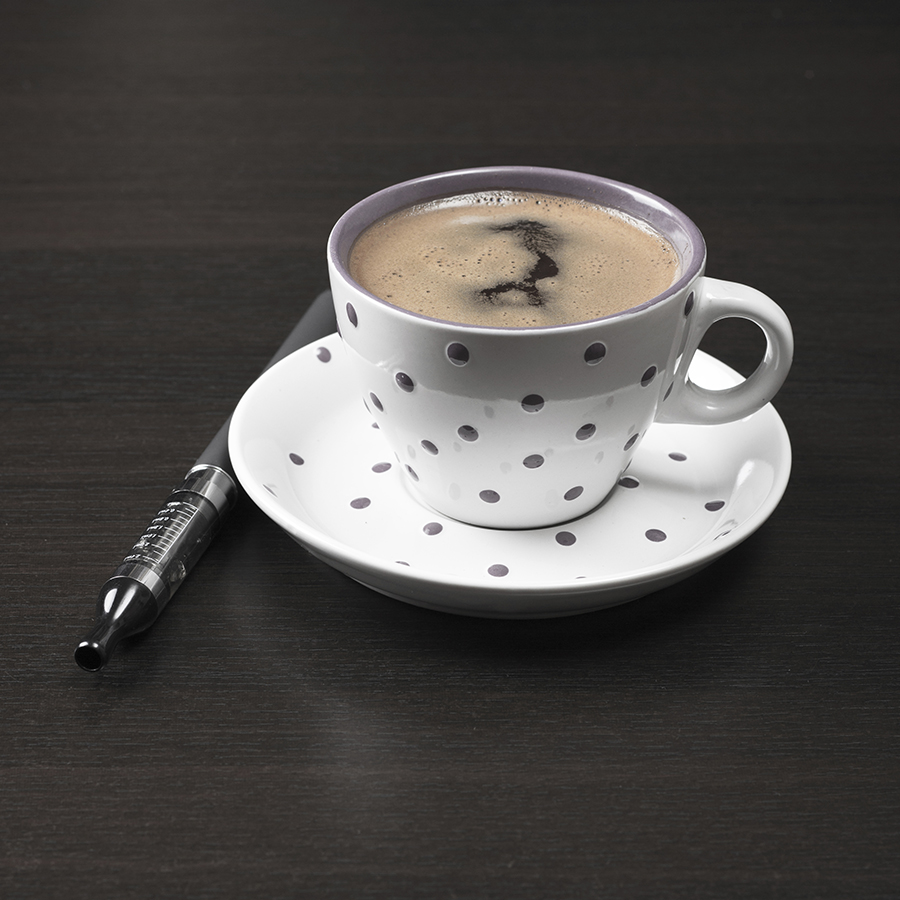 Anyone else been waiting for an easier, more sleek and stylish way to get their morning coffee?!

But apparently drinking coffee is SO 2014, because the infamous vape phenomenon that has changed the tobacco industry seemingly overnight and revolutionized the way kids are ingesting harmful drugs is at it again, bringing your caffeinated compulsion needs into the exciting future of vape pens!

Yes, we are talking about a coffee vape… a caffeine inhaler!

I can already hear a meeting full of recovering addicts and alcoholics rattling with applause from so many coffee hooked vape enthusiasts.

Vapor juice with a jolt of energy you would expect from your espresso, promoting a new way to get your coffee fix has found its way to the shelves. But, is it safe?

Red Bull for the Lungs

Caffeine vaping is here ladies and gentlemen. As the new java vape-juice hits the high street, trend analysts reckon it’s set to be the newest trending topic in everyone’s morning energy boost. The New York Times describes it as ‘Red Bull for the lungs’, and Dr. Donald Hensrud, the director of the Mayo Clinic’s Healthy Living Program was quoted stating:

“Coffee is one thing, then you have your five-Hour Energy drinks. This is next in line on the spectrum of people who want that acute buzz.”

Just to clarify really quick, vaporizers are essentially the same as electronic cigarettes. They work in exactly the same way; using heat to convert a combination of chemicals into vapor, which you then inhale. Vapes and e-cigs hit the scene a few short years ago, and ever since the mechanized smoking machines have only gotten flashier and more popular, even appearing in movies and television in place of cigarettes while promoted as a ‘safer alternative,’ although this is still often disputed.

Granted, caffeine vaporizers only release considerably less caffeine than your standard Americano, approximately two milligrams per inhalation, and don’t contain any nicotine. However these new devices do contain:

So far, given the nature of this mixtures, experts still aren’t sure whether they’re safe. Mary M. Sweeney from the Johns Hopkins University School of Medicine recently stated,

“The way our bodies handle caffeine that is inhaled can be very different from when caffeine is in our food or drink. Even if an inhaled product delivers the same dose of caffeine as a cup of coffee, it may have different subjective effects for people because the time-course might be different.”

It is already a fact that caffeine is a very powerful and potentially poisonous drug. YES, I said drug, because caffeine is a drug. Not in the narcotic sense maybe, but still.

A caffeine overdose is actually a very real, very fatal possibility. Even if these caffeine inhalers have a low dosage and capacity for consumption, what about the people who push the limits on their own vaporizers and end up overdosing? How dangerous is it to give someone a constant supply of caffeine vapor, especially with the kids who puff massive clouds of fumes and fog.

Other reports claim that the brands in question have yet to test their products’ efficacy; it begs to wonder how safe it could really be to inhale smoke from coffee grounds.

Can Smoking Coffee be Safe?

Well this argument might go on forever, because many still dispute as to whether vapes are even a safer alternative to cigarettes to begin with.

As far as actually smoking coffee itself, another obscure trend attempting to innovate our method of ingestion is strangely gaining popularity, and sources have reported it’s extremely dangerous to smoke the actual coffee beans.

Viral videos of teenagers smoking coffee are currently popping up all over the internet and quickly racking up the views online. The issue goes far beyond palate abuse, and legions of concerned parents would do well to keep an eye on their children, especially teenagers.

There are a variety of side effects so far credited to smoking coffee beans that range in severity and consistency including:

So far no real good has come from smoking coffee itself, but the vape industry seems confident that is all about to change.

As of now the FDA has not reviewed the caffeine inhalers, but according to Time, companies have been able to work their way around it by marketing products as dietary supplements or beverages. So of course you should trust something that can’t even be honest with what it is in the first place. Makes sense, right?

At this stage of the story there is no definitive information it appears on whether or not this alternative is going to be a safe and inexpensive deviation from the typical coffee drink, or if it is going to be the beginning of a whole new bag of worms for the vape industry.

People are already asking what risk this could pose to their children and teenagers, and what other horrors could result from a bad mix of this drug with another. Only time will tell. Will Starbucks start selling their own vape juice? Will coffee shops and e-cig stores join forces?

As for me, I’ve worked in a café a long time, and I’m all about the real deal. I love getting my much needed espresso the old fashioned way, ya know… in a cup, with my name misspelled on it.

While the caffeine inhalers are sure to get some attention, the compulsive and harmful behavior is the real issue when it comes to any substance. The disease of addiction can afflict others in many different ways, but at the end of the day there is always an answer. If you or someone you love is struggling with substance abuse or addiction, please call toll-free 1-800-777-9588