The Power of Women Connecting in Drug Rehab

Women and men are very different, and I know you didn’t need me to tell you that.  Some drug rehabs are coed and a growing number cater to females only.  What would be the advantage of a drug rehab just for women?  Let’s just say the the power of women coming together can do a lot for a woman in pain. 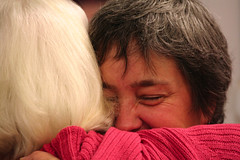 Many people know that women generally talk a lot and get more emotional than men.  There are exceptions, but this holds true for the majority of women.  This isn’t to say that women are inferior or fatally flawed.  On the contrary, women’s overall sensitivities and abilities with communication and emotion are definite assets.  Men sometimes struggle with the subtleties of both areas.  So no, we aren’t calling these some kind of stereotypical female weaknesses.

Women understand some of the inequities and insecurities that can come with being female.  Some of these are historical and some are byproducts of natural strengths.  A person who is very intelligent can at some point be trapped by that intelligence, over-thinking and over-analyzing until they are too paralyzed to take action.

Similarly, women have a much larger portion of their brain dedicated to emotion and communication.  These are critical for creating communities and weaving social connections into a web of support.  However, these too can become overloaded.  A woman’s sensitivity to people in need can cause great despair if she doesn’t take good care of her emotions.

Too Many Painful Emotions Can Lead to Drug Addiction

With emotions being such a huge force in a woman’s functioning, any sort of chronic overload can be devastating.  Just doing the basics to live each day can become so hard, some women choose the quick relief of drugs and alcohol.  If for just a while, they can have a break from the relentless emotional battle inside.  These painful emotional pathways can lead a women to a drug and alcohol addiction.

Women look to other women and compare themselves.  In this comparison, there is often insecurity of some kind.  It is worse when there is no relationship, but it can still exist with women who know each other well.  This comparison could be competitive and prevent good connections to form.  In many cases, the desire to create relationships and expand their network helps to overcome the comparisons.  When women can be genuine with each other, the importance of the bond grows.  When the bond grows, the walls of self protection and insecurity come down.

In drug rehab, women commonly feel like they are alone in their addiction experience.  In most cases, their addiction has alienated them from their network of support and important women in their lives.  Although drug rehab isn’t an instant fix for those hurt relationships, the safe environment allows recovering women to learn how to bond again.  They form a new support network of women who have many painful emotions in common.  These women can use these refreshed skills to repair and improve the relationships in their regular life.

Drug rehab isn’t a panacea of peace and quiet.  But it is a place to rebuild one’s ability to connect with other women.  And connecting with other women does more than just increase the amount of friendships in a woman’s life.  Drug rehab relationships also help rebuild each woman from the inside out.  Each relationship can teach her something about herself and the woman she strives to be.  That is the incredible power of women connecting in drug rehab.