1 in 8 Addicted to Smartphones 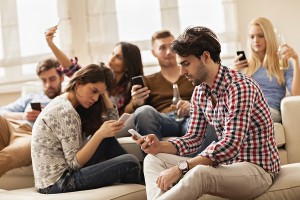 At this point you may have been thoroughly convinced that smartphone addiction exists in some way or another. So many people seem to be absolutely consumed by the tiny screens in their pockets, and the plethora of social media and online gaming options that spring to life from that little device every moment of the day.

We have written a lot about how smartphones really are addictive, but what most people don’t realize is how prominent that addiction has become. Even more worrisome is a new study has revealed that much like any substance, the more you use a smartphone the worse it gets.

The study was conducted by researchers at the University of Derby, with psychology lecturer, Dr Zaheer Hussain as one co-authored of the study. What the researchers found was that the more you use a smartphone, the higher your risk of becoming addicted.

According to this study, symptoms of smartphone addiction were labeled as:

These characteristics were among the key indicators of smartphone addiction, and Dr. Hussain explained that higher scores of narcissism is the most common and obvious sign of the addiction. Narcissism was defined as excessive interest or admiration of oneself and one’s physical appearance, and narcissism and ‘selfies’ go hand-in-hand when talking about smartphone addiction. Constantly needing to take pictures of one’s self and post them to social media is a pretty clear cut indication of a compulsive behavior. Dr. Hussain said,

“A significant positive relationship was found between narcissism and addiction to the phones, suggesting that the more narcissistic a person is, the more likely they are to be addicted to their smartphone,”

Let’s Get the Digits

Statistically the study came to some surprising conclusions as far as how potent smartphone addiction actually is. Researchers found:

This survey was done with a group where the average age of those who took part in the online survey was 29 years old.

The research also supported the concern that the boundaries separating work and social time is also becoming skewed with excessive smartphone use.

This is definitely not the first time researchers have taken a closer look at the obsession with smartphones. In 2011 there was a study that found:

The researchers involved in this particular study believe it should be made compulsory that anyone selling smartphones should warn customers of their potential to become an addictive product.

Dr Hussain’s research paper, titled: ‘Smartphone Use, Addiction, Narcissism, and Personality: A Mixed Methods Investigation’ has recently been published in the International Journal of Cyber Behaviour, Psychology and Learning (IJCBPL). Since the study he has said the study informs us about smartphone overuse and the impact on psychological well-being, saying,

“We now use smartphones on a daily basis and for various tasks so being aware of the psychological effects is very important.”

“There are various smartphone apps such as Facebook, Twitter, Instagram and Candy Crush, as well as Skype and email that make smartphone use psychologically more attractive and can lead to addiction.”

Earlier this year a study was published by the University of Honk Kong, about 6% of the world’s population is addicted to the internet, and with the fact that smartphones are so closely related to our lives online it all makes sense.

Other research shows that using a smartphone, iPad, or tablet as a way to pacify a toddler may delay their ability to learn self-control, and that heavy use of mobile devices at a very young age is having an untold impact on children’s development and behavior. It is probably safe to say these deductions make a considerable contribution to future issues involving smartphone addiction.

So how much will we see the number rise? Is 1 out of 8 as good or as bad as it gets?

Smartphone addiction, along with other dependencies developed around technology and the internets have begun to get more attention, and more is being done to learn how to best diagnose and treat this kind of addiction. Drugs and alcohol are not the only compulsions we develop, but they are definitely some of the most dangerous. If you or someone you love is struggling with substance abuse or addiction, please call toll-free 1-800-951-6135