The criminal justice system is facing a growing problem with its population, and I’m not talking about overcrowding or broken down facilities. Criminal inmates with drug and alcohol problems are largely overlooked and not given proper drug treatment to help prevent returning to jail or prison. Take a closer look at this situation and how it could affect you. 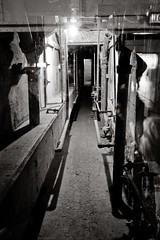 According to this report on the criminal justice system, just 11% of inmates with drug and alcohol problems received any sort of treatment. Worse yet, not many of those who did get some help did not get evidence-based treatment. At best, a person in the criminal justice system may have just the slimmest chance of getting drug treatment that will make a difference.  The lack of proper treatment is a key factor in relapse and almost certain re-offense.

Take a look at the financial side of this story.  The cost of keeping a person in prison or jail continues to go up all the time.  If just a fraction of that population could be effectively deterred from getting back into the system, think of the potential for financial savings. Proper treatment and support would be well worth the effort and expense.  This report estimates that every year an inmate remains out of prison and employed, society saves roughly $90,000.  Can you just imagine how communities could spend $90,000 in ways that can benefit everyone?

The report echoes what the most casual person in many communities can observe.  Our criminal justice system tends to spend money on jails, prisons, and various ways to support incarceration.  This happens not only in large metro areas, but also rural regions and small cities.  While it may seem to reduce the most obvious symptoms of overcrowding, what does this do to prevent people from offending in the first place.  What does it do for inmates with treatable problems directly related to their likelihood of committing crimes? Very little.

Communities everywhere need to widen their focus to include better identification and treatment of those with drug and alcohol issues. Yes, some buildings need improvement and even replacement. Yes, good staff also costs money to provide community protection. Many justice systems just aren’t equipped or focused on treatment or reentry programs.

Funding and support for this may be heavy on the front end with grants and community funding. But evidence-based programs are just that – based on evidence of success and reduced symptoms. These provide the best chance for prisons to reduce some part of their population and save the community money.

This is clearly not a problem that will be solved overnight.  Many small meaningful steps will be needed to shift the focus from population control to drug treatment and prevention for those with alcohol and drug problems. Of course, this will not make much difference for those without these diagnoses. But it is a significant and under-diagnosed problem. Any positive change in this part of the criminal population will ultimately benefit all of society.