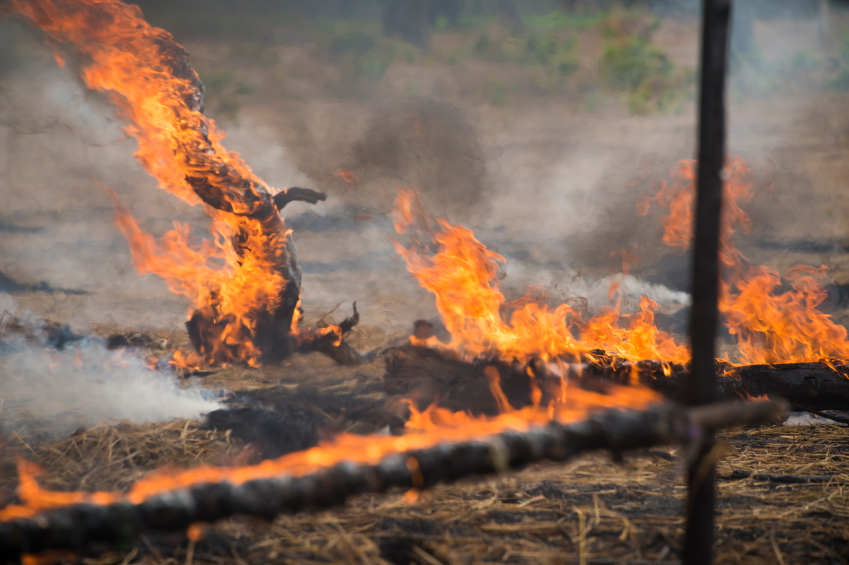 The wildfires across California this year have devastated the entire state. However, a less obvious victim of the damage are marijuana growers. Marijuana growers are losing the farms that they spent years cultivating in mere moments.

Last month, the Butte Fire in Calaveras Country claimed two lives and burned through 70,000 acres and 500 homes. Mike Ray was one of the victims of the fire who suffered both on a personal and professional level. His house, his parent’s cabin and 99 marijuana plants were all destroyed. Ray spent close to $100,000 growing the marijuana plants. In one article, he says,

“I’m very, very worried about the future of the county. Calaveras is one of the poorest counties in California and is dependent on the underground industry of cannabis. Many, many people will not be able to rebuild and will have to move somewhere else.”

Other marijuana farms are suffering tremendously. Close to 100 farm areas in Calaveras County alone went up in flames. Because marijuana crops are still illegal at the federal level, pot farmers cannot utilize wild safety net programs offered through the U.S. Department of Agriculture.

Programs such as the emergency loan program provides loans help farmers recover from physical and production losses due natural disasters such as wild fires. Another program such as the Disaster Set-Aside program allows producers to defer payment for one year and receive additional assistance. However, marijuana farms do not have access to any of these programs.

As great as the marijuana industry is in California, many farmers are cutting their losses and moving elsewhere. The situation does not seem to be getting any better due to California’s extreme water shortage crisis. Marijuana plants require a large supply of water to thrive.  An anonymous grower who loss $800,000 in marijuana crops last august, said in an article that the drought and wildfires would change the entire industry period and force them to consider other less risky alternative.

Although many are giving up, others choose to remain optimistic. With California’s new improved medical marijuana regulations and the potential for full legalization next year, those who stick out may be profiting from the industry in the near future.  Ray believes the reward is to come in the marijuana industry stating:

“I have a vision that if Calaveras County could embrace the industry, we could build the Napa of cannabis up there,” said Ray. “Being only two hours and 15 minutes from San Francisco, it’s very doable. Ten years from now, it could be an entirely different place. Disasters like this could bring a change.”

Can You Get High Off the Wildfires?

The raging wildfires that are destroying marijuana farms have left many Californians curious about what effects the burning plants would have on nearby residents and first responders.  Are the firefighters susceptible to getting high from battling the blazes of pot beside them?

The answer is probably not. As a matter of fact, Ryan Vandrey, an associate professor at Johns Hopkins University’s Department of Psychiatry and Behavioral Sciences explained in an interview that it is highly unlikely that someone within range could become high. “Unfortunately, no. Or fortunately, no, depending on your perspective,” he said. In fact, you’re much more likely to get sick from the burning fumes and chemicals.

Fires in Indonesia have been blamed for getting communities high. In one situation, police disposed of marijuana in a large bonfire and journalist started to become sick and dizzy.  Scientists do not deny that you cannot get a “contact high” from breathing in marijuana smoke but you have to break in an awful lot of it, LiveScience notes. This usually occurs in a room with no other source of ventilation.

If you’re worried that California will soon have a marijuana shortage, you can rest easy, Medical marijuana has been legal in California so long that the state’s industry is well establish. Still, the wildfires will drive prices up in the short term and put small farmers out of business.

Whether you are for marijuana reform or not, the point is that California’s economy is being affected by the wildfires and water crisis. Marijuana is a drug so if you struggle with addiction, you should not use any addictive mind altering substance, even if it is legal. If you or someone you love is struggling with substance abuse or addiction, please call toll-free 1-800-777-9588 today to speak directly with an Addiction Specialist.