Last night, when I should have been in bed, I started watching a show called Intervention on the A&E network.  I was immediately drawn in, knowing that a person with serious drug addiction problems was going to be faced with going to drug rehab.  That reality can be so hard for someone so deep into their problem.  Here are some of my thoughts after watching the tail end of one program and following another program from start to finish.

Drug Addiction Is A Family Disease 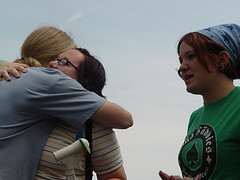 The drug addict may be the one going to drug rehab, but the entire family had a role in the development of their addiction.  Either by their absence or presence in the addict’s life, the family and other loved ones are all pieces in the addiction puzzle.  Sometimes, just the way people have tried to help the addict have only helped the addiction progress.

In some cases, family members have also had their own addictions to battle.  Daughters end up getting an intervention while the mom is still recovering.  Daughters starting a drug addiction to deal with the pain of living with her mom’s and dad’s drug abuse.

Today, I also looked through some of the show synopses to see the variety of problems leading to drug addictions.  In nearly all the one minute videos or summaries, there was a life difficulty that seemed to be part of the picture.  Sexual abuse, family drug and alcohol addiction, parents getting divorced during childhood, deaths in the family, trouble coping with other health conditions, and more.

In the one episode I watched, the young woman had been described by her family as happy, generous, loving, and energetic.  Her parents had a strained marriage and eventually divorced.  This devastated the young woman when she was a child.  Her parents also moved far apart from each other.  Both parents admitted paying little attention to what their daughter did and giving few boundaries.

She found drugs to cope with these family problems, and was not found out until she had been using for a number of years.  Clearly, a one hour show was not enough to delve into the complex issues of this family, but it seems her emotional pain stemmed from the breakup of her family and the lack of guidance by her parents to use healthy coping skills.

Drug Addicts Are Often Fiercely Protective of Their Addiction

In each and every video summary that showed some intervention moments, the addict firmly refused drug treatment of any kind.  They defended their addiction from the assault of their friends, family, and professionals.  They wanted people to let them just “do their thing”, they weren’t crazy, and they just weren’t going to do it.  Period.

Why in the world would a person choose a chemical compound over loving people, a good lifestyle, and being healthy?  Because drugs and alcohol give them something instantly and they keep the addict from feeling the pain.  People let them down, jobs don’t always last, and health can fade.  But drugs have “been there” when they needed them the most.  It is how they cope with each passing minute.

I will probably comment more on this powerful show in the future.  Those images and feeling have continued to stir inside.  For anyone who has been through at drug treatment intervention, my heart goes out to you.