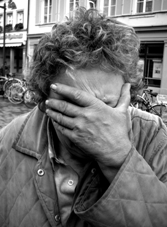 During cocaine addiction, addicts make mistakes. They hurt people they care about, say things they later regret, do things that hurt themselves and others – often things that are criminal. Guilt over these mistakes is a common theme during cocaine addiction treatment, and dealing with that guilt in an effective way can mean the difference between real healing and progress in recovery and ultimate relapse. Recognizing the guilt for what it is and processing it during cocaine rehab is a great start, but making amends and learning how to deal with that guilt after treatment is crucial for a sustained recovery.

Anger and depression in cocaine addiction treatment are often directly related to guilty feelings around behavior during cocaine addiction. Many addicts have the feeling that someone who did the things they did during addiction doesn’t deserve to get treatment and have a good life. In these cases, the anger and depression are symptoms of guilt and when the guilt is recognized for what it is and dealt with accordingly, these symptoms will fade without medication or further treatment. Identifying root causes is one of the biggest things you’ll do during psychological addiction treatment, and simply identifying what is hurting you can help you make strides in recovery.

Once you’ve identified feelings of guilt and the incidences that caused that guilt, your next step is to start processing those feelings during psychotherapeutic treatment. Depending upon what happened, there may be a number of different foci during treatment. If your actions caused death or pain to someone else, you may talk through those feelings and consider reaching out to those you hurt. If your children were neglected or abandoned as a result of your actions during cocaine addiction, you may consider including them in family therapy and giving them the opportunity to heal as well. This isn’t an easy process and it’s far from pain-free but taking the time to talk it out, discuss your feelings about what happened and consider the feelings of others, you can begin to let go of the guilt you feel that threatens your recovery.

After cocaine addiction treatment, feelings of guilt often remain, even if you did a great deal of work to process through it during treatment. Coming face to face with some of your mistakes after cocaine rehab can reopen the wounds. But it also gives you a great opportunity: in some cases, you can make direct amends for your previous behavior. For example, if you stole money from a family member or roommate, you can begin to pay it back. Getting a job and paying a portion of what you owe until the debt is gone can really help you let go of the guilt – and help your relationship with the person you stole from.

If you have not yet chosen a cocaine rehab, consider Orchid Recovery Center for women. Located in Florida, we provide a comprehensive treatment program designed to meet your detox and addiction treatment needs. Contact us today for more information.