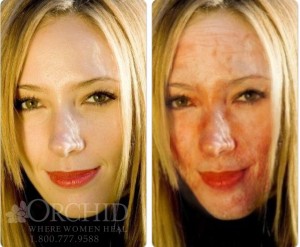 The acclaimed TV series Breaking Bad has painted an extremely graphic portrait for many people of what to expect when looking into the face of a long-term meth addict with some of its more memorable characters. However some people may believe these are mere exaggerations put on by fancy studios that profit well from dramatizing everything. Rest assured, these are pretty accurate depictions of long term abuse of the drug, and are just a glimpse of the faces of meth.

Some readers might be familiar with terms like ‘meth mouth’ or maybe the more articulate ‘meth mites,’ which are referring to the physical appearance of meth users, specifically the face. It should come as no surprise these terms are thrown around in pop culture and daily language to anyone who has gotten an up close and personal look. These are not overzealous myths; meth has a profound and disfiguring effect on meth addict’s bodies, and you can read it on the faces.

Crystal meth is an amphetamine, which is a type of chemical compound that increases brain activity related to the neurotransmitters in the brain for dopamine and norepinephrine. Among other things, this direct effect on the brain activity causes a rapid loss of appetite. Over time as a user continues their consumption and the amount of meth increased the user becomes progressively malnourished from their blatant disinterest in food and eating.

With this new ‘all meth diet’ the addict quickly cultivates significant weight loss. The faces of meth users are easily recognized by their sunken in cheeks and hollow-looking eyes.

The next thing to take notice of is rotting and decayed teeth. The reality of ‘meth mouth’ is another common aspect to the faces of meth users. The reasons that ‘meth mouth’ develops may vary, but it is all the product of excessive drug use.

First, as mentioned above, the complete lack of nutrition of most meth addicts in active addiction typically has a deteriorating effect on their hygiene, and specifically the maintenance of their teeth. Meth users often neglect the most simple but important self-care tasks, because nothing is more important than getting high for an addict, especially brushing their teeth.

Meth also has the tendency to cause users to clench and grind their teeth, which can commonly cause cracked and chipped teeth. Cracking and chipping in the teeth leaves their teeth and gums susceptible to bacteria and infection, not to mention looks scary.

Poor nutrition plays a pretty repetitive roll in the self-destruction of the faces of meth. In the majority a cases meth addicts have noticeably brittle and thinning hair. Without the much-needed nutrients to sustain full, healthy and growing hair, meth abusers who have already molded themselves into a sickly appearance, are infamous for their faded faces framed by dull and thinning hair.

Delusions, psychosis, and paranoia– who wouldn’t want to use meth?! A common delusion to meth addicts is what is called ‘meth mites.’ The meth addict will believe these imaginary bugs crawl under their skin, which cause them to use tweezers and other sharp objects to pluck, pick, and scratch at their skin. Even the face and eyebrows are not safe, to the point that meth addicts will pluck out all of the hair from their eyebrows and even actually take chunks out of their own skin. The faces of meth addicts are typically covered in gaping sores and unsightly scars from the constant picking and plucking for invisible insects.

Crystal meth is a toxin. Like any good toxin, the body does its very best to rid itself of the poison by way of the pores. This causes severe acne and that not-so-fashionable over-all diseased-look. Meth also slows down the body’s ability to heal and repair itself so that acne, skin infections, and the sores and scars caused by ‘meth mites’ and skin picking will typically take longer to heal. All of these troubling traits formulate a ghastly complexion on the face of a meth addict.

The Phenomenon of ‘Meth Face’

This dangerous drug causes the blood vessels to constrict, cutting off the stable flow of oxygen-rich blood to circulate through all parts of the body, including the skin. Because of this constriction the heavy use of meth can actually weaken and destroy these blood vessels, causing your bodies tissues to become easily damaged and inhibiting your body’s ability to repair itself. As a result, when you take meth it is basically like you are slowly killing your own flesh! It isn’t getting the oxygen rich blood it needs, which in turn leaves you looking like an extra from another TV series… The Walking Dead.

The effects of abusing dangerous drugs like crystal meth and other illicit narcotics cannot always be as easy to see, but these drugs destroy lives inside and out. The destruction caused by addiction digs deep and kills so many people from the inside out, and even though you might not think so, sometimes the true horror of your disease is written right across your face. If you or your loved one is in need of treatment for meth addiction, please give us a call at 800-951-6135.