Change is something most people struggle with at times.  Drug rehab represents such a huge change of lifestyle, priorities, social interactions, and more.  One of the biggest changes is to a person’s state of mind.  When they go to drug and alcohol rehab, they know they will be coming back to reality, away from their constant escape. 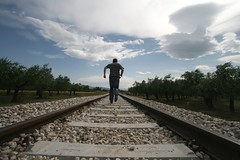 Addiction Is A World Of Escape

Everyone needs an escape sometimes, but people with drug or alcohol addiction live in a world of escape.  Despite the physical, emotional, and social problems that come with addiction, they continue to pursue the escape.  Why keep at it if it pulls your life down?  Because the escape becomes the most important thing in an addict’s life.

It’s not that someone with an addiction seeks to destroy their life.  They are actually making a desperate attempt to preserve whatever sanity and peace they might have left.  By escaping from the pain, they get some form of relief from having to face it.  They can “fuzz out” for a while and forget about losing their job, the fight with their spouse, their overdue bills, their painful memory flashbacks, or whatever piece of reality that seems to assault them.

Drug rehab often seems to threatening to a drug addict or alcoholic.  They don’t feel they can function without the drugs, much less cope with the really difficult things.  Drug rehab brings the drug addict back to daily reality.  It helps them begin to adjust to daily life with awareness instead of constant escape.  They learn different ways to handle pain besides covering it up or running away from it.  This is not an easy thing, but it begins a habit of self-honesty.

Drug and alcohol rehab teaches about having a life of balance.  Healthy temporary escape can be listening to some good music, reading, doing exercise, talking with a good friend, dancing, etc.  These things get the person closer to their authentic self, while drinking and drugging gets them further away.

The purpose of healthy temporary escape is to take a break with the intent of returning with a fresh mind and calm emotions.  Unhealthy escape from drugs and alcohol often make emotions and thoughts even more agitated when they are forced to see reality again.  Healthy escape includes the expectation of returning to reality – unhealthy escape hopes to avoid reality forever.

Drug rehab can be a tough ride sometimes.  Making the transition from escape to reality can be jarring and uncomfortable.  But like many difficult things, it gets more familiar and easier to manage with time and support.  Drug rehab sets up the addict with positive connections and a network of people that care long after they leave the program.  Reality and pain can be tough to face, but drug addicts don’t have to face it
alone.