Cure for Addiction and Anxiety in Genetics 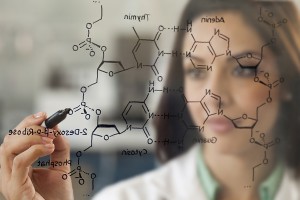 For a long time there has been a great deal of work put into trying to discover the exact link between our genetics, or mental health and our addictions. The answer has been pondered, studied, and speculated as a major factor in how we can trace and treat mental illness, behavioral impulses, and even problems with substance abuse. Some have suggested that changing the way that a gene in the brain region operates may actually offer a new solution to reducing addictive cravings and depression at the source.

Most studies into the topic centers on the concept of manipulating proteins that bind to specific DNA sequences and influence the function of a person’s individual genes. It seems like now maybe all that work is showing some results, as recent research into neuroscience has uncovered a genetic mutation in the human brain that produces a molecule with the ability to not only reduce anxiety and cancel out unpleasant memories, but could also offer a natural resistance to addiction to some drugs, including marijuana.

For the first time, scientists have demonstrated that a genetic variation in the brain makes some people intrinsically less anxious, and naturally more able to forget fearful and unpleasant experiences.

This molecule derives its name from “ananda,” the Sanskrit word for bliss, and according to experts, an estimated 20% of American adults have this mutation we are talking about. This gene produces higher levels of the so-called “bliss molecule”, anandamide. Once it binds to the endocannabinoid system it replicates the calming effects associated with THC, the active ingredient in marijuana, and is also comparable to other drugs.

So essentially this little miracle mutation actually has the ability to mimic the sensation one feels from getting high.

This isn’t something brand new to the human body by the way. Humans all produce levels of anandamide and most also produce a lower amount of FAAH, which is an enzyme that deactivates the molecules effects. It is the individuals who produce greater levels of anandamide who have a mutation in the gene that produces FAAH, resulting in more consistent activation of the endocannabinoid system.

Applying it to Addiction

So now that we got all that “blah, blah, blah science!” out of the way, where does the part about addiction and genetics come in? Well anandamide and addiction intersect is the cannabinoid system, which also oversees the release of a pleasure sensor all too familiar- dopamine!

The researchers involved believe that individuals with the variant FAAH gene experience less anxiety and thus are less likely to turn to external substances to reduce that feeling, including marijuana.

Have you ever met someone who had a very unsatisfying experience with marijuana, well studies have even suggested that ingesting marijuana is an unpleasant experience for the people with variant FAAH gene, and using the substance often leads to decreased happiness.

A group of researchers at Wake Forest University discovered that much like people, monkeys with low levels of dopamine type-2 (D2) receptors in the brain’s reward center were more likely to self-administer cocaine. One of the leading researchers Dr. Michael A. Nader noted that of course all drugs that are commonly abuse create a release of dopamine in the reward center of the brain, which then triggers a sense of pleasure and craving.

But when Dr. Nader exposed the animals genetically less prone to use cocaine, they ultimately lost D2 receptors and started to self-administer the drug as well. So while they did not begin with at a high risk, these monkeys were able to develop a dependence on the drug and Nader has connected that to the decrease of D2 receptors.

What was most exciting was that this effect was in fact reversible: With abstinence, 60 percent of the primates’ D2 receptor levels normalized. The clear implication is that anyone regardless of genetics can become addicted or even abstinent if given the right environment to support the change.

So all together what we are getting at is that if there could be a treatment strategy developed that would reproduce the impact of anandamide in correlation with the variant FAAH gene, there could be a positive impact on a variety of conditions including:

But the gene being manipulated to work against marijuana dependence is also capable of having a direct impact on the dopamine production involved in various other substances including:

How can this be applied? I’m no scientist, but my guess is to provide some sort of tool to modify how the brain reacts to substances, or to supplement the feelings associated with drug abuse and repurpose them for the “bloss molecule” which could also be used to curb anxiety. Either way it is huge to see the connections being made as far as modern medicine, biology, and treatment for such troubling afflictions like addiction or mental illness.

Mental illness, addiction and our genetic make-up are continuing to be pulled closer and closer together by science, and in the process stigma is slowely but surely overcome and the future of treatment continues to look brighter and more effective for saving those who need it most. If you or someone you love is struggling with substance abuse or addiction, please call toll-free 1-800-777-9588