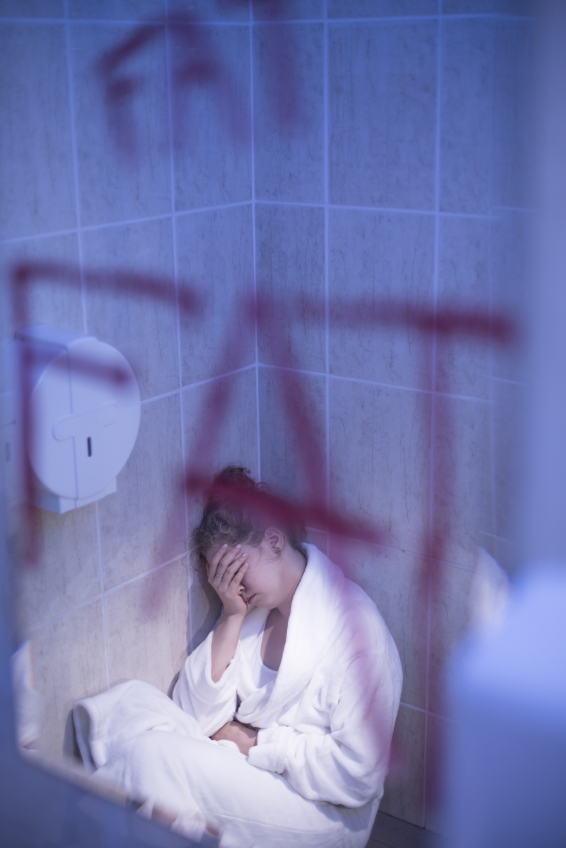 Take it from me, eating disorders are no joke. Eating disorders like bulimia wreak havoc on the body months, even years into recovery. Still, recovering from an eating disorder is such an enormous gift of health to your body. That’s why, Alexa PenaVega, known for her role in Spy Kids and a recent stint in Dancing With the Stars, has continued the conversation regarding her journey overcoming bulimia.

PenaVega has received criticism about her diet, but what most do not realize is how difficult the recovery from an eating disorder is. Recovering bulimics battle a host of side effects. Often, they find it difficult to keep certain foods down. These side effects occur due to the acid that increases in the stomach from continually throwing up food. That acid wears down the teeth enamel and damages the esophagus.

It can be hard, at first, to come out with an eating disorder. PenaVega first went public about her six-year battle with bulimia during last season’s Dancing with the Stars. Now, the actress hopes to continue talking about her recovery in the hopes of aiding others. She credits her recovery to her faith and the help of professionals who were able to work with her to get back to a healthy weight.

“I had so many insecurities about my body! Since overcoming that obstacle in my life (By the Grace of God) I had a lot of trouble processing all sorts of foods in my body. I had done a lot of damage and recovery from it all was a PAINFUL process. But 100% worth it,” she wrote on Instagram. “My body feels strong. I have energy. I feel like a woman!!”

Many were criticizing the 27-year-old about her new gluten-free diet, stating it was not a healthy diet to advocate for young fans. However, the actress continued saying she has finally found a diet that works for her:

“There are certain foods that still give me some trouble… So for me… It is easier to eliminate those foods so that my body absorbs all the nutrients I can get!”

PenaVega hopes that continuing to talk about her bulimia will help more victims get the critical help they need to recover. In her last appearance before getting eliminated from Dancing with the Stars, PenaVega explained how her eating disorder developed when a movie producer has told her she was too fat. She did not know who to go to for help and was afraid to open up about her bulimia. She hopes a face to bulimia will help someone come forward.

“The one thing that I had always wanted was for someone to be real with me about that whole situation,” she said last November to People. “You read textbooks and it’s just so, well, textbook. ‘This is how you get over bulimia.’ But it is so much deeper than that. I wish I’d had somebody who could have told me, ‘It’s scary.’ You struggle giving it up. You want to get rid of it, but you struggle because, in a strange way, you enjoy it.”

The actress is set to reprise the role of Killjoy in the upcoming film Machete Kills in Space. Thankfully, it appears PenaVega is not going to quiet down anytime soon. It seems that she will continue to raise awareness about eating disorders.

“This is something that I was so afraid to talk about before, but this show has given me so much confidence,” said PenaVega after her elimination last November. “I went through a big battle and all I wanted to do was move and inspire people and show them that bulimia is something that you can get over. That’s all I wanted tonight. I couldn’t have asked for a better way to end my time in the competition.”

Bulimia can be life-consuming if one lets it be. I think it is such a great message that PenaVega is sending out to young fans that they do not have to be afraid of coming forward. I know how difficult it can be to want to achieve a particular ideal figure and doing whatever it takes to get to that point. Fortunately, learning to treat your body in a healthy way is the key.

Eating disorders like bulimia are serious issues that need to be addressed by a professional. Never be afraid to come forward. You’re not alone. If you or someone you love is struggling with substance abuse or addiction, please do not wait. Call toll-free 1-800-777-9588.