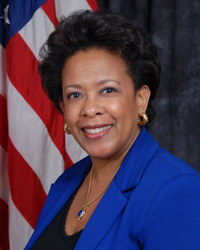 After a five-month-long wait, Loretta Lynch will finally get her confirmation vote for Senate Attorney General. Lynch will be will replacing Eric Holder, who was temporarily holding the position.

Even President Obama acknowledged the exceptionally long delay, which last week called “crazy” and “embarrassing,” and said that it was due to a variety of political reasons, which should become clear once you read about these 5 awesome things about our new Attorney General, Loretta Lynch. And today, Ms. Lynch is expected to win approval with the support of Democrats and at least five Republicans.

Lynch will be the first African-American woman to hold the position. A graduate from Harvard College and Harvard Law School, Lynch has been a federal prosecutor as well as has worked at several private law firms.

It seems an unfortunate trend these days is police violence against citizens. And what’s worse, many of the offending cops aren’t charged for what seem to be criminal acts.

However, Lynch helped to successfully prosecute the police officers who severely beat and sexually assaulted a Haitian immigrant named Abner Louima with a broken broom handle. This was a high-profile case, and one which led to the conviction of New York City police officer Justin Volpe as well as others who were involved.

Lynch is an unabashed lawyer who goes after criminals, regardless of their standing or rank (as seen above in #2 and below in #4). She recently filed charges against Rep. Michael Grimm, a Republican from Staten Island, for tax evasion. He is accused of hiding more than $1 million in sales and wages from his restaurant business.

Although Grimm won re-election in the midterm elections, the case won’t just go away. Grimm, who ironically used to be an undercover FBI agent, has pleaded not guilty and is scheduled to go to trial in February.

After prosecuting former New York State Senate Majority Leader Pedro Espada, Jr. for embezzlement, he was sentenced to five years in prison, which made him yet another one of several politicians Lynch has successfully brought cases against. In case you’re wondering, Espada recently pleaded guilty to one charge of tax evasion. He was convicted of stealing more than $400,000 his nonprofit organization.

“The indictment alleges that funds that could have been, and should have been, applied to purchase medical equipment, and hire personnel to enhance health care services for an underserved population, were diverted by the defendants for their personal use and to benefit friends and family members,”Lynch said. “In these difficult economic times, the charged crimes are all the more reprehensible.”

If you’re a Goodfellas fan, then you know it’s about a major heist pulled off by alleged mobster Vincent Asaro and his crew. In real life, Lynch was the one who charged Asaro and his associates for the 36-year-old robbery of $6 million in cash and jewelry from a Lufthansa Airlines vault at John F. Kennedy International Airport. Yep, that was based on our new attorney general.

If you ask me, Ms. Loretta Lynch sounds pretty bada$$.

It’s good to see more and more women in the limelight and to be gaining more representation. Women deserve equal representation and treatment. Sometimes, however, there needs to be special circumstances and exceptions. When it comes to alcohol and drug treatment, gender-specific programs are most beneficial for women. The majority of people in rehabs across the country are male. By going to an all-women’s facility, you are guaranteed to have your voice heard. Also, a gender-specific program for women is ideal in that the staff is sure to address all aspects of your life, from family and home life, to childcare, to legal issues if they apply, women’s health, and so on – basically, issues that pertain to women. Please call toll-free 1-800-777-9588.