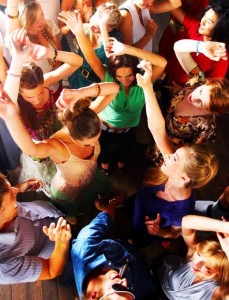 We all know that alcohol acts as a social lubricant which can make it easier to relax and let you’re your guard at social gatherings. Alcohol also provides revelers with their main form of entertainment. Now that you’re living a sober lifestyle, throwing a dry party – one without any alcohol or other drugs, might feel a little bit awkward. After all, when alcohol is imbibed, there’s no need for entertaining your guests; they’re pleased as punch to sit around and drink. Or, if games are being played, they usually involve alcohol, various drinking games like “beer pong” or “flip cup.”

This isn’t to say that a dry party can’t be fun. It just means that, as a host or hostess of a dry party, it’s a good idea to have some kind of structure to the party so that you and your guests will have a good, sober time while ringing in the New Year. Here are 4 ideas for a sober New Year’s Eve party that will guarantee a good time for all.

Yes, theme parties are quite popular amongst drinkers, too. But having a theme party and really going all-out can be a great way to provide a good time that’s both clean and sober, too. Have an 80’s party or a Roaring 20’s-themed party (think: Great Gatsby) and plan events throughout the night accordingly. Research the theme/era of your party and incorporate the popular games or activities that epitomize it. Designate a time during your party to have a “Best Costume” contest and give out goofy or smutty prizes – whichever suits your crowd.

Have a bonfire party at the beach, go to a roller skating rink, or a local park and cook-out. Or get your laugh on by going to an Improv or stand-up comedy performance. Open mic night can be a lot of fun, too. Dare each other to get on stage and show-off their hidden talents. Being entertained and having your share of belly laughter is a great and even healthy way to stay sober and enjoy your new year’s eve.

Have a party that revolves around all your favorite board games. Provide games and encourage your friends to bring their favorite games, too. Think outside the (game) box, too. Games like Twister and Charades – they’re interactive and get people moving and laughing. You can also introduce a game of Music Trivia: gather your folks around and announce how you want to do the scoring. Have prizes (again, silly or sexy) and set your iPod to shuffle or put on Pandora. This can be a lot of fun and get your friends into some friendly sh*t talking about who’s got the higher music IQ.

Another out-of-the-box game idea is the Open Ended Story Game. Spend some time before your party writing down the beginning sentences of several stories. Use classic fairy tales, themed stories and spooky ghost stories. Be sure to have at least ten story beginnings to put in a hat. During the party, have each guest take turns getting a slip of paper to start their story. That person reads aloud the slip of paper then adds one line to the story. The next person adds their line. And so on and so forth. This is a great game for everyone to use their imagination and try out their creativity, whether it’s in telling a scary story or trying out their own brand of comedy.

Have a Texas Hold ‘Em tournament or set up different areas with different decks of cards. For instance, you can have a regular deck of cards for playing Spades or Rummy, then an Uno deck at another table, and several other tables/areas set up depending on how large the party. Your guests can rotate to different games when they want to play something new.